Dahlqvist for WoV – “If we can win, that would be upset for Linköpings knowing the team they have this season”

By eliminating Falkenberg in the playoff semifinals and preventing the rivals to contest in their 13th consecutive finals, Hylte/Halmstad involved themselves into fighting for the title in the Swedish men’s volleyball championship Elitserien after five years. The team that showed the most in the regular season, Linköpings VC, will stand on their way to winning the gold medal. 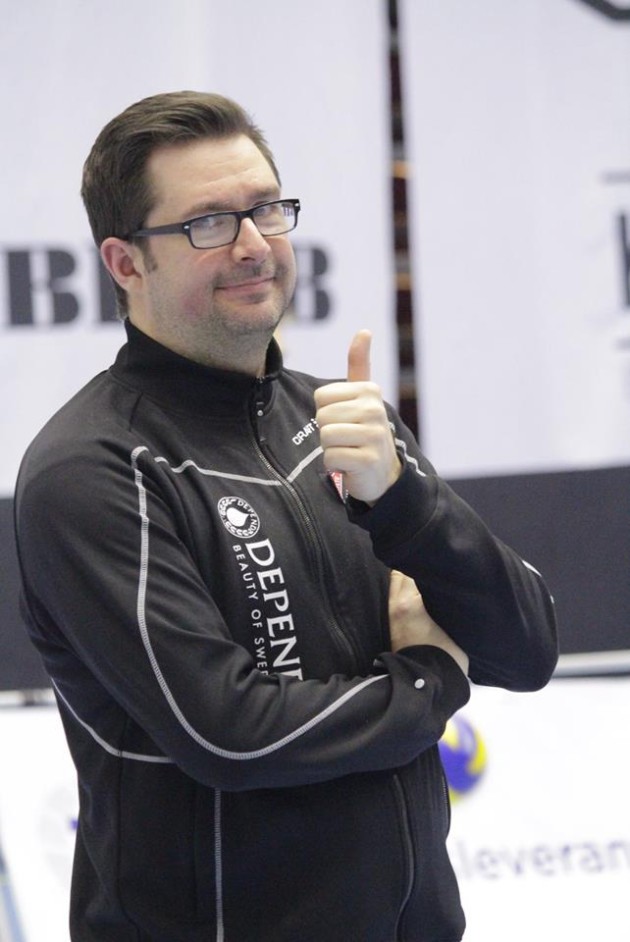 Hylte/Halmstad have one of the most promising head coaches in Europe on their bench. A 37-year-old Per-Erik Dahlqvist replaced an Australian Matthew Young, the expert who led the club to their last national title (2013), last summer. Interestingly, Dahlqvist came to Hylte/Halmstad from the German women’s side Rote Raben Vilsbiburg, where he served as an assistant coach. Despite his young age for someone who is a head coach, he already had a rather interesting path…

“I started as an assistant coach in Sweden in the highest league about 10-12 years ago while I studied coaching for three years at the Olympic training center. After that, I was working as a head coach for three years at the national training center with junior national teams. Later on, I followed Swedish International Hall of Famer Anders Kristiansson to Toyoda Gosei Trefuerza in Japan. Working under Anders for three years there resulted in winning a national cup, a league title and an Emperor’s cup. Working with Anders was a great experience as he opened up my eyes with his experience and knowledge he gained working at an international top level for the last 35 years or so. This year, I came back to Sweden from Germany and took over Hylte/Halmstad as a head coach,” Dahlqvist began his interview for WorldofVolley.

Hylte/Halmstad have a negative record against Linköpings this season. How difficult for a coach is it to start the series of the playoffs against the club from which he already lost three times so far?

“It’s all about how you choose to look at the situation. Those games are history by now. We didn’t play our best volleyball in any of these games. Now, we are stronger as a team and have players in a better physical condition. Linköping have had a great season, only recording one loss, and now having 30 consecutive wins. The pressure is on them and we can go in with good confidence and try to steal the title which everyone expects them to win. We play a physically stronger team that has more experience. If we can win, that would be an upset for Linköping knowing the team they have this season. Playing as an underdog hopefully makes us relax and play more freely with nothing to lose in this best-of-five final series.”

What do you think you can change in the way of playing of your team comparing to the matches in the regular season?

“We play a physically stronger team which means we have to serve well and have a little bit of patience in our net game. We need to be strict in our blocking game and have good timing against their bigger outsides. We will probably not have as many kill blocks as them, but we can do a good job having many stop blocks instead which gives us good situations, first in defense, and after that in our transition attacks. At the same time, we need to attack a little bit smarter and use their block to our advantage when we get out of the system.”

How do you prepare for the finals?

“We are in good physical and mental state at the moment. The team has played their best volleyball of the season during the quarter and semifinals, so we don’t feel the pressure to change a lot. At the same time, now coming to the finals, what we haven’t fixed earlier in the season is too late to fix now. It’s more important to keep the bodies and minds fresh and, at the same time, believe in what we are doing. The closer we get to the first final the more time we will spend looking at the video and trying to find solutions on how to break them. It will be a challenging task, but we look forward to it.”

Which are the players in Linköpings you consider the biggest threat to your team, and how do you plan to annul their advantages?

“I like their opposite Martin Larsson. He is playing a lot like our own opposite Nick Goodell. Not the most powerful opposites but smart and technical ones often choosing the right spikes at the right moment. He is the one making the big points for his team and we need to be able to stop him. They also have two good blockers in the middle. Our setters need to play smart and choose wisely what balls to play in what situations to make them come 0.1-0.2 seconds later in the block. At the same time, our attackers need to choose the right spikes in the right moments. We can’t simulate Linköping’s size in the block at practice, so we better learn from our earlier games in the season that we need to keep our heads cool and use their size in the block to our own advantage this time.”

The best-of-five playoff finals in the Elitserien 2017/18 will start on April 15.

ECH U18 M: Russia and Czech Republic qualify for semis by scoring wins in the last round