F4 in Kazan: Bernardi – “I’d prefer to play Zenit in final”; Alekno – “My players squeeze the last out of themselves”

Two teams who have just seized championship titles in their respective leagues, Italian SuperLega and Russian Superliga, will face each other in the second match of the opening day at the 2018 CEV Champions League Final Four in Kazan, Russia (Basket Hall, Saturday, May 12, at 18:00 C.E.T.). Some would say it is a final before the final... 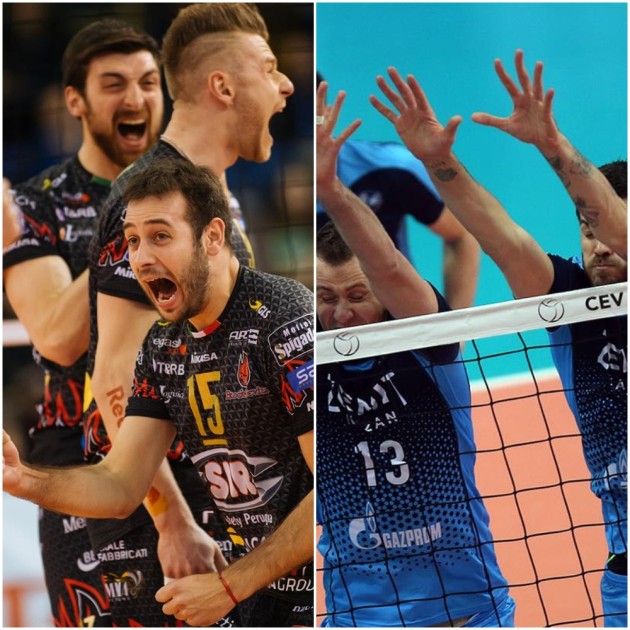 The Italian Sir Colussi Sicoma Perugia will take part in the CEV Champions League Final Four for the second time in a row and these were the only two times when they participated in F4. Perugia will chase their first ever European trophy in Kazan. Perugia will face the hosts Zenit Kazan in the semis and will have the chance to take revenge on them for losing the last season’s final. Perugia finished as No.1 in Pool A with 16 points (6-0), progressing to the Final Four by eliminating Turkish Halkbank Ankara in Playoffs 12 (3-0 and 3-0) and Russian Lokomotiv Novosibirsk in Playoffs 6 (3-1, 2-3).

“I don’t want to call the match Zenit vs. Perugia a final before the final. You can’t say that. This is only a semifinal. But absolutely, if I could choose, I would prefer to play Zenit in the final. This is a very strong opponent. If we want to win, we need to play very, very well. We’ve had more gaming practice recently, but I don’t know if it’s good or bad. Zenith will be fresh, they had more time to recover. A week ago, Perugia won the Italian championship, so we are full of positive emotions and will try to channel them in the right direction in Kazan. In this season we have won three trophies. The players aren’t relaxed, but there isn’t much pressure on them before the Final Four. Still, we are aiming for another title in Kazan,” Lorenzo Bernardi, the coach of Perugia, who will be accompanied by 40 fans in Kazan, said.

As for Zenit, this is their eighth consecutive participation in the Final Four, having the second-best record of five trophies won in the Champions League (Russian CSKA Moscow, who shut down in 2009, are No.1 with 13 gold medals). Along with Diatec Trentino, Zenit is the only team to have won the CL title for three consecutive seasons. They dominated Pool D with 18 points (6-0) before getting the organization of the Final Four.

“Preparation for this Final Four was, probably, the most difficult mentally. Now, it’s hard for the players to train every day. I see they squeeze the last out of themselves. They were ready to play this Final Four a week ago. I’m not the Almighty, I can’t say how it will all end. I know what we did, how we prepared ourselves and roughly understand what to expect from our team. As for the opponents…We conducted a theoretical analysis, and how it will be in practice – we’ll see tomorrow. Let’s hope that our crowd will support us. We hope for support. Even if there is a little excitement, it helps a lot,” Vladimir Alekno, the coach of Zenit, stated.

The match for the bronze medal (Sunday, May 13)

F4 in Kazan: Lube afraid of Toniutti; Gardini – “Each match gives you chance, you only have to take it”

Kazan is the better team but 2 things are a problem for them.
1. They havent competed for over 2 weeks. Waiting around and training against each other can be lifeless no matter how much you try to simulate real competition.
2. The are looking forward to a break before the long haul of the summer National team work.