VNL W: In Jiangmen – clashes of the Titans

Week 4 of the FIVB 2018 Volleyball Nations League is in front of us and the most interesting matches are expected in Pool 14 in China where the domestic team will host USA, Brazil and Russia. 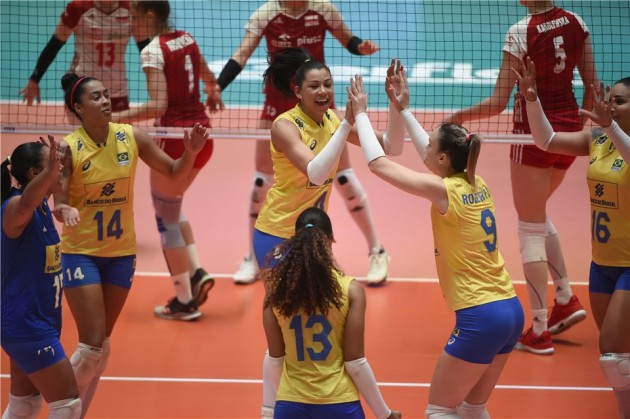 In Week 4, the hosts of the pools are Netherlands, China, Thailand and Poland.

The Netherlands will host the Dominican Republic, Italy and Serbia and we can say that they will have a serious job to do in front of their fans. The good thing for the Dutch girls is that this will be the second consecutive week that they are hosts of the pool and in the previous one they scored 2-1.

Theirs the most serious opponents in Rotterdam will be Serbia who are currently on the third position and with 6 wins in a row. Their match is scheduled for Thursday but in the previous 9 matches, the score is 5-4 for the European champions. In the last two matches, which teams played last year, Serbia twice won and both matches were at the European Championship in Azerbaijan.

On the other side, Italy can be a very tough opponent. After a bad start, they are now in a good condition, last week they defeated China and tandem Egonu–Syllais, for now, the right combination.

The group’s weakest opponent is the Dominican Republic. After 9 matches they have only two wins although their leader Brayelin Elizabeth Martinez is the fourth-best scorer of VNL.

For many reasons, this will be the pool of the week. Olympic champions will face USA and Brazil, the first two teams from the standings and Russia. All four teams are the cream of volleyball. But we will see what will happen on the standings after this week. USA and Brazil will play for the top position while China and Russia will fight for the place in the first five teams. Better say, Russia will fight for the better position on the standings since that China are the organizers of the Final tournament.

On the other side, Russia closed the previous week with two wins while China in the third match suffered defeat from Italy.

Another interesting pool of Week 4. Three out of four teams are from Asia but Turkey are the main favorites considering that they are in the fifth position with 6 wins and three defeats (two in the previous week).

Japan and Korea have 4-5 and 11 points while Thailand who are for the second consecutive time host of the pool, on the 14th place with only two wins. We hope that in this week they will fix performance in front of a home crowd since that last week they scored three defeats.

The good news is that Kim Yeon-Koung returned to the National team and she is already in Thailand. She (130 pt) and Meryem Boz (125 pt) are among the Top 10 scorers of VNL.

After this week situation in the standings will for sure be changed for these teams from Pool 16. Polandare the hosts and they are in the best position (11.place) with 3 wins same as Germany who are also with 3 wins. On the other side, Argentina and Belgium are in the bottom. Yellow Tigers scored two wins but they have last six defeats in a row while Argentina won only two sets from 9 matches and are still without points.

So, the real derby in this pool we will see between Poland and Germany and that match is scheduled for Wednesday. They will close the Day 2 in whole VNL. Once again we must mention that Polish and German players hold two of the three scorer leaders. Malwina Smarzek is on the top with 212 points while Louisa Lippmann is the third with 177 points.

Just to remind you, the host team and 5 best teams after the Round Robin Phase will qualify for the Final Round in Nanjing, China from Jun 27 to Jul 1.

Anatomy of a volleyball player with Karch...