France’s boys have just completed their preparations for the upcoming qualifier. France is set to compete through January 3-7 in Brno (CZE) and play there a series of tough opponents, namely Italy, Germany, Belarus plus the hosts from the Czech Republic. 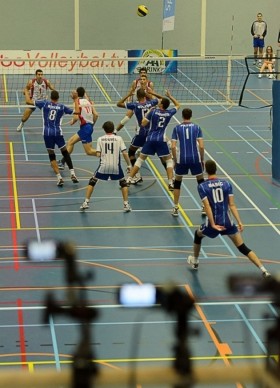 The group just got back home after suffering four defeats at the Four Nations Tournament held in Amsterdam. On January 1 head coach Slimane Belmadi and his players will travel to Brno to play there the Czech Republic on Thursday for their first match in the group. Even though they lost four matches, their performance in Amsterdam was not too bad especially as they were testing the likes of some strong sides such as Italy, Serbia and the Netherlands. “We could never line up the starting six we wanted to opt for” says Belmadi. “Some injuries and a virus have sidelined the group and therefore our best starting six was never tested there. Even though we were somehow obliged to make changes and the guys were physically not in their best shape, we still showed some good play but the real team chemistry is still missing. I still do not know which players I will be able to line-up on Thursday for our first match with the Czechs” he continues.

Back from the Netherlands, the players and the coaching staff will spend the New Year’s Eve all together before flying to Brno. “We need to work a lot also on the psychological side and in order to qualify for the final round we’ll have to fight bravely in every match” insists Belmadi. “We definitely want to make it to the final round since the development of this group can continue only by joining the European Championship as well as the Worlds coming up later this summer in Mexico”.

With Germany being always a force to be reckoned with and Italy coming back to the top as showed this past summer when the juniors claimed European gold, France’s mission looks pretty demanding. “This is definitely the toughest among all preliminary Pools” says captain Luka Basic. “We have to stand the pressure and show good conditioning especially since we’ll have four games in five days”.

POL W: Atomic girls get ready for the New Year via exclusive camp

ONCE IN A LIFETIME: Leg point for...