France’s girls will try to claim a ticket to the final round of the 2013 CEV Youth Volleyball European Championship scheduled for this coming March in Serbia and Montenegro via the qualification tournament that is set to run from January 3 through 7 in Nea Ionia Magnisias, Greece. Read latest volleyball news on Worldofvolley.com. 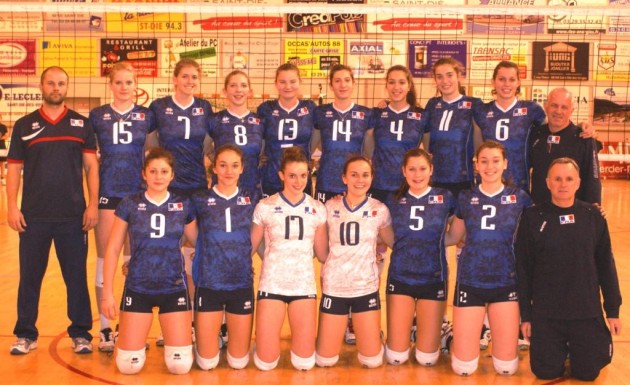 Apart from the hosts, France’s national team will be confronted with the opposition brought by Spain, Denmark, Azerbaijan and Finland.

After a joint training camp with the neighbors from Germany, France’s girls have joined a prep tournament held in Slovenia where they first lost to Hungary and the hosts, before rounding out their campaign with three wins over Austria, Israel and Slovakia. “Our defeat to Hungary eventually excluded us from the semis” says head coach Serge Marouteau taking pros and cons from this competition where he could test two different starting six. “Some matches were played over three sets and this did not help us. We wanted to test all members of the group so that each player could have some playing time before the European qualifier coming up next week” he stresses. “We still could show some good skills, especially in attack”.

The group got back to Paris and will be celebrating the New Year’s Eve all together. “We have foreseen a couple of training sessions also for the last day of the year. We won’t enjoy this time with our families but it has been one and a half year that we have been working for this European qualifier, so we all know we have invested quite much in this project”.

Since the group does not include any Volleyball giant – such as Italy, Poland, Russia or Bulgaria – the young girls mentored by Marouteau may have a shot at the ticket to the final round. “It looks like everything is wide open” he says. “Spain was top-seeded in the group and we shall be careful; Denmark and Finland are traditionally not that strong and I do not know Azerbaijan and Greece at all. However, at this age, the major problem is the capacity of controlling emotions that normally are impacting more than tactics on the outcome of the matches”. Marouteau says his protégés have got excellent skills in service while their reception lacks consistency but still may be good enough to stand the pressure of their international debut.

The group captained by Juliette Fidon will fly to Thessaloniki on Tuesday with the goal to be among the twelve teams that will finally play for European glory this coming March in Serbia and Montenegro.

To read the latest news from France click here

ITA M: Stoytchev, “No revenge, each match is a different story”