France started their way on the FIVB Men's U21 World Championship with a wide victory against Venezuela in straight sets (25-17, 26-24, 25-18) in their Pool D match at “Ataturk Hall” in Izmir, Turkey. 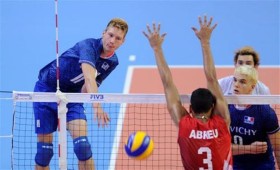 France started the match more aggressively and succeeded to have the start fever through their concentrated attacks and the proper services. France led 7-3 in stuff blocking, and 4-0 in serve aces.

After a great start, France was ahead 25-17 in the first set, before Venezuela played their best in attacks during the second set using Martinez to penetrate the solid French block as they led many times but France succeeded to win the crucial points to win narrowly 26-24.

Again, France regained their dominance in the third set to win widely 25-18 with Winkelmuller doing a great role.

See the profiles of French and Venezuelan national team, also the profile of Winkelmuller.