Maria Borodakova, middle blocker of Dynamo Kazan and a two-time world champion with the Russian national team commented on the coach Marichev’s decision not to call her for the European Championship 2013. 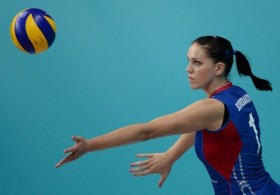 “I heard the decision of the coaching staff last night when I called Andrey Erkhov, the manager of the national team. He said that I would not be called for the next gathering. Today I called the head coach Yuri Marichev and asked him to explain the reasons for the decision.”

What did the coach say?

“The player of my status should not be placed in a square for substitutions. In the World Grand Prix I played, but rarely went out to the starting lineup. Unfortunately, the coach felt that at this stage the team needs other players. Perhaps my time in the national team has already passed. I work hard at every training session, try to do each exercise. I think that I am still dedicated to volleyball.”

When will you join Dynamo?

“I did not call the head coach of the club of Rishat Gilyazutdinov yet. I will do this in the near future. I think that he will give me some time to rest, because of the performances for the national team I did not have vacation. Then I will start preparing for the season in the club, which promises to be challenging.”

See the profile of Maria Borodakova.