Hungarian receiver Rita Liliom, well-known for her performances in the Polish league had a lot of trouble during this year's transfer window. Finally, she will play next season in the Turkish team of Yeşilyurt. 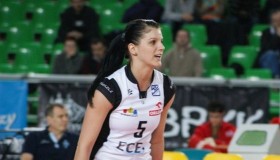 After the 2012/13 season she decided to leave Poland. She was a member of Pałac Bydgoszcz but admitted that her last season in the Orlen League was not a particularly successful one.

“The only positive thing was that I received all the salaries on time. I had trouble with major and minor injuries, and in December of last year, I had to undergo knee surgery. It was hard, and in addition, I did not have a good relation with the coach, but still managed to jump into the top six. We ended season in eighth place, and at some time later, I decided to leave the club,” explained the receiver.

Also, bad luck did not leave the member of the Hungarian national team while searching for new jobs. Liliom already made an agreement with a Romanian club, Stiintą Bacau, which will next season play in the Champions League, but…

“When I arrived in Romania, I got a message that the club changed management, which does not intend to accept an agreement with me,” said an athlete who has already announced to take legal action against the unprofessional behavior of the club from Bacau.

Eventually, she reached an agreement with Yeşilyurt Istanbul, which in the season 2012/13, at the last moment, avoided relegation from Turkish First division in the play-off game and finished in ninth place.

For more news from this country, click on Turkey.