New opposite of Volero Zürich, Ukrainian Alesia Rykhliuk (MVP and gold medalist in the Korean league last season) in an interview with native volleyball federation has revealed that the Swiss club will soon announce plans to sign contract with another new player. She was talking about Nataša Osmokrović, who until recently was a member of Dynamo Moscow. 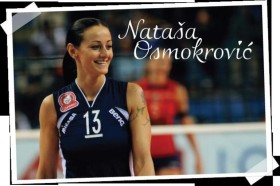 The news of the new club of famous Croatian may be surprising, since the same Osmokrović announced in May this year that she will “suspend her shoes on the pin”, which she explained with the professional burnout.

“Last year was very tyring and stressful for me and I no longer felt the old love for volleyball, the main reason that kept me playing. Even as a child I told myself that I’m done with the sport in the moment when I stop feeling the pleasure of playing,” explained the receiver.

Apparently, lucrative offer from a leading Swiss team encouraged the athlete to change the decision to retire from sports.

Next season Volero will play in the Champions League with the respective squad, including the recent signings, the Japanese receiver Yuko Sano, Cuban Kenia Carcaces and Karine, who came from the Brazilian runner-up Sollys.

See the profiles of Osmokrović and Volero.