GER: Generali has got second match point in Bundesliga

Munich, Germany, February 16, 2012. After being eliminated in the Playoffs 12 of the 2012 CEV Volleyball Champions League by Lokomotiv NOVOSIBIRSK, Generali UNTERHACHING is trying to use its second “match point” to secure the number one spot at the end of the regular season in the Bundesliga. 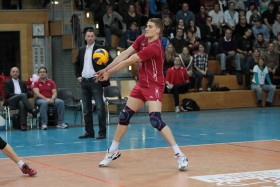 Generali has got second match point in Bundesliga

After the trip to Siberia last week UNTERHACHING did enjoy a weekend off, a rare treat that was welcomed by coach Mihai Paduretu who had to deal with a lot of battered bodies.

Prior to the match on Sunday against the “Pirates” from Leuna in Saxony-Anhalt Paduretu reports: “All players are fit”.

Hampered by injuries UNTERHACHING suffered a humiliating loss to BERLIN Recycyling Volleys (0:3) two weeks ago while squandering its first chance to secure the number one seed for the Playoffs.

Despite missing three core players the team showed a different face in Novosibirsk – it lost 0:3 as well, but displayed an encouraging performance under difficult circumstances. Now being at full strength again Generali wants to use its second “match point” to secure the top spot in the Bundesliga.

Paduretu is confident that with two games to go his side won’t give up the first place that it has owned basically for the whole regular season.

“We’ll stay number one, no doubt about it at all”, he says, adding: “The loss to BERLIN was annoying, but not the end of the world. My team has worked hard and deserves to stay on top even with that defeat”.

The coach also doesn’t want to draw comparisons to last season when his team played a close to perfect regular season but faltered in the Playoffs.

“Last season we had our period of weakness in the Playoffs, so it was too late to turn things around. That broke our neck”.

This time Paduretu views the loss to BERLIN (which eliminated UNTERHACHING in last year’s semifinals) as a warning shot coming at the right time.

“I am convinced that my team will draw its conclusions and show a good reaction. Satisfaction is a very dangerous factor. As an athlete, you should never be satisfied with what you have accomplished. You must go on and on and on”.

So, come Sunday, Paduretu will be optimistic: “We will only lose once we beat ourselves and deliver a sloppy work”.