Italy’s Unendo Yamamay BUSTO ARSIZIO completes the draw for the Playoffs 6 of the 2013 CEV Volleyball Champions League – Women to play there Azerrail BAKU after the so-called “Butterflies” could score a 3:1 home win (25-23, 25-21, 18-25, and 25-18) and claim also the deciding golden set (15-10) in their return clash with Germany’s SCHWERINER SC. Read latest volleyball news on Worldofvolley.com. 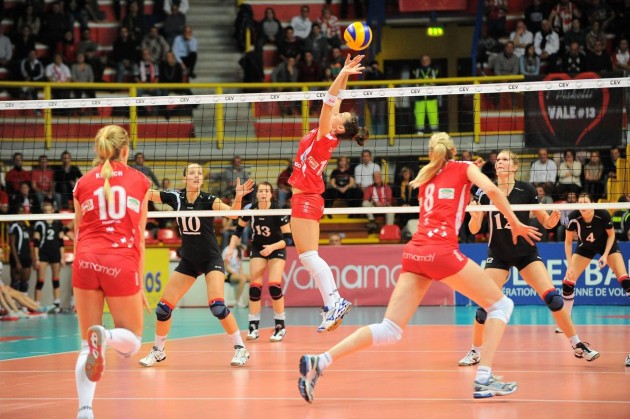 The team coached by Carlo Parisi played with great determination and could best a German side that also showed quality and consistency in their game. Margareta Kozuch top scored in the end for Unendo Yamamay with 23 points – her contribution was particularly important in the golden set – while team captain Christina Bauer added 13 to the count of BUSTO ARSIZIO including 4 blocks. On the other side of the net, Quinta Steenbergen paced SCHWERINER SC with 17. The ambiance was simply great during the golden set that was preceded by an unusual performance by the home fans who danced the “haka”, the well-known trademark of the All Blacks.

Unendo Yamamay had started the game with a good pace anchored by Kozuch and Valentina Arrighetti – who scored 7 and 5 points respectively in the opening set – and even though two aces by Janine Voelker almost re-opened the affair, Yamamay cruised to the final 25-23. SCHWERINER SC caused some troubles to the home side in set 2, especially in defense, with Gilda Lombardo replacing Francesca Marcon; Kozuch, Arrighetti and Bauer were the ones that did determine the fate in the end with their attacks and blocks (25-21).

In the third set SCHWERINER SC stepped up the quality of their play going up 16:12 especially via the attacks killed by Steenbergen and Anja Brandt. Maren Brinker and Kozuch attempted a late comeback for the home side but it was too late (18-25). Bauer and Marcon paced Yamamay in the fourth set thereby calling for the golden set to determine the team making it to the Playoffs 6. There Unendo Yamamay played extremely well in blocking and defense, libero Giulia Leonardi did a great job and Kozuch was once more the match winner with her attacks.

“This was a special match for me and Margareta as there were many friends from the national team standing on the other side of the net” said Maren Brinker in the end. “We had no other option than to win and to achieve this we had to play as a team. I am very happy we did so also to pay back our amazing supporters”.