Italy’s Andreoli LATINA – another rookie in the European Cups – could make it to the semis of the 2013 CEV Volleyball Cup – Men after losing the return match with Generali UNTERHACHING (24-26, 24-26, and 21-25) before claiming the golden set (15-11) to play in the next round Turkey’s Maliye Milli Piyango ANKARA. This and other volleyball news read on Worldofvolley.com. 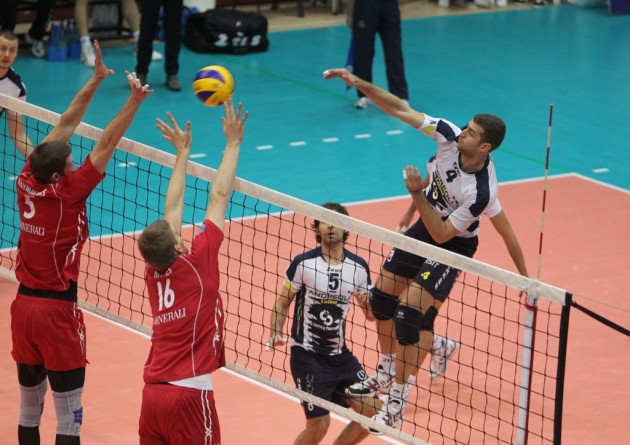 In the semis LATINA will play the first match in Turkey’s capital city and then the return at home.

The first set was extremely close with Generali breaking away after the second technical time-out (from 15:16 to 15:20); LATINA stormed back after Silvano Prandi opted for Andreas Fragkos and Murphy Troy, drawing level at 22 all, before the guests from Germany performed much better in the so-called money time (24-26). The second set was close too with LATINA moving to the front (17:14, 19:17, and 23:21) before Generali stormed back once again with Jan-Willem Snippe sealing another 24-26. Generali started out very strong in the third set (13:7) and even though the hosts reduced the gap (20:17), UNTERHACHING could finish it off in straight sets (25-21).

In the golden set the teams re-opted for the initial starting six with the only exception being Troy for LATINA; the hosts got up 6:4 after an ace by Troy and set the pace also by the time the teams changed side of the court (8:7). After another deuce at 9, Troy blocked for the 11:9 and an error by Snippe concluded the game to fire up the party in Latina.