Macerata swept Roma for the third time this season and redeemed itself for the recent two defeats conceded. Savani MVP with 73% in attack, 5 aces and 1 block. 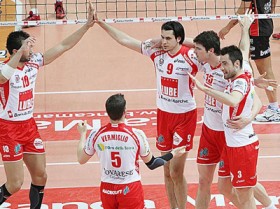 Andrea Giani (coach M. Roma Volley): “Roma did well in the first two sets: in the first the difference was made on 4-5 plays in which we did not dig as we could have, while in the second we have not been effective in position 2. In the third, Macerata created a big gap thanks to its serve and it was impossible to get back”.

Alberto Giuliani (coach Lube Banca Marche Macerata): “The team was well organised tonight, it found the level it had lost last week against Piacenza. I really liked what I saw, they always looked like having control of things, even when they were only two points ahead in the sets. Only the great teams playing with confidence can bring you this feeling and I think the opponent could feel this confidence too. We’re starting an intense period, many games and not much training to come, we’ll need to do well to stay focused and be as organised and effective as tonight. The Italian Cup is one of our targets, and reaching the Final Four is an important stage for us. Once we’ll be there, though, we’ll need to win, and that won’t be easy”.

PHOTO OF THE DAY: Giannellimania in Monza