Iran outscored Italy to get their second consecutive win in the World League 2013 in an extraordinary game that ended 3-1. The teams fought until the end, but Iran’s coach Julio Velasco, who previously coached Italy’s men’s and women’s national volleyball teams, lead his team to victory. 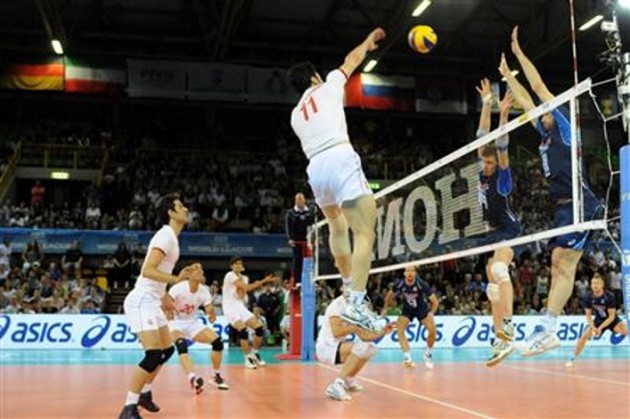 The teams fought until the end, but Iran’s coach Julio Velasco, who previously coached Italy’s men’s and women’s national volleyball teams, lead his team to victory.

Fans showed great enthusiasm at Palasport G. Panini in Modena, welcoming a loud, lively and joyful crowd of Irani fans coming from Italy and abroad.  Italian supporters paid a tribute to the coach of the visiting team, Julio Velasco, who started off his career in Modena, where he won four championships from 1986 to 1989 with Panini Modena team.

Italy began the match with a shortfall, with player Ivan Zaytsev out of the starting six, due to an injury to his left ankle. Young Vettori replaced him in the role of opposite.

Iran kicked off the match well, and at the first technical time out the host team lead 5-8. Italy managed to tie the score (16-16) with an ace by Travica. However, Iran’s effective serving and allowed the team to continue its run to 23-20 before clinching the set with a positive attack by Mousavi.

In the second set, Italy’s coach Mauro Berruto replaced middle blocker Beretta for Piano. The set proved more balanced than the previous, but Iran is still prevailed 6-8. Two winning spikes by Parodi level the score 8-8. Iran became more consistent, especially at the service and at the blocking to remain ahead 11-15. Travica trusted Vettori and Savani, to allow Italy to come back to tie the score 16-16. Italian supporters lit up the crowd, but the host team took the lead again 17-19 thanks to two consecutive aces by Davood. Iran shut out the match with a spike by Mahmoudi (22-25).

In the third set, Berruto chose Zaytsev over Vettori. Italy played more intensely and found valuable points in Zaytsev and Savani at the service, fighting back for the set. Travica served the middle blockers, Birarelli and Piano, and Italy did not slow the pace, getting the lead 19-14 and closeing the third set at the fourth set point thanks to a good spike by Zaytsev.

In the fourth set, Velasco replaced the opposite Mahmoudi for Ghafour. After an even start, two consecutive aces by Mousavi, Iran the lead (5-8). Italy tied the score (12-12) thanks to Zaytsev, but at the second technical time out Iran found itself ahead 14-16. Italy reacted and attempted to defend with Zaytsev, and overturned the situation (19-16). Iran tied the set 23-23 and reaches the set point, and after a streak of tight, exciting spiked clinched the victory at 30-32.

The loss is a blow to Italy, whose unbeaten run came to an end last week after five matches, when the team lost to Russia 3-2.

Friday’s match was the first meeting for the two countries in the FIVB World League. Iran and Italy face off again on Sunday at 19:00 local time.