Jochen Schöps is in Belgrade this weekend to play Serbia in the fourth round of the 2013 FIVB World League. 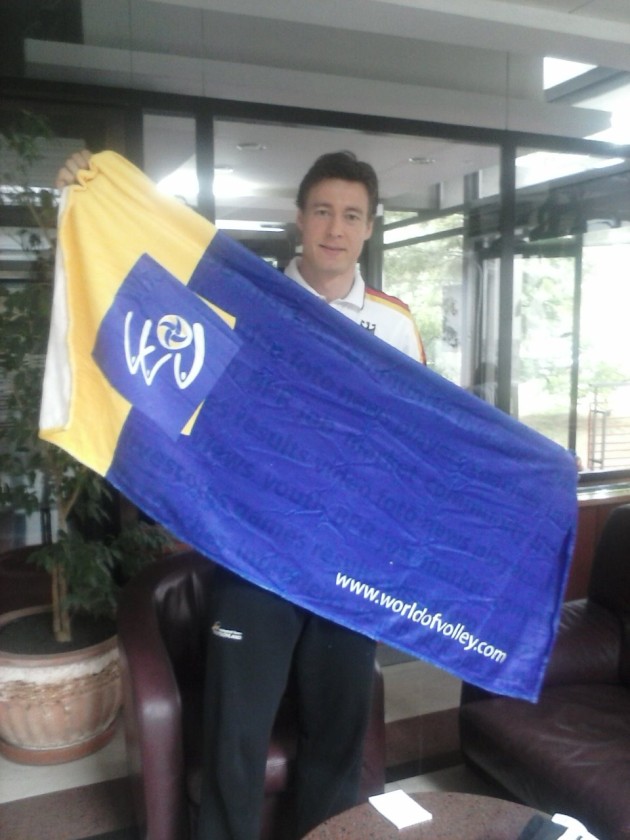 Schöps posing for the fans with WoV towel

Serbia and Germany met for the last time so far in the 2012 London Olympics. Your team won by a 3-2 in the group stage, so what exactly changed in the way of playing of the German national team since then?

“I think our style didn’t change much. The style of coach Vital Heynen is that he would like us not to risk a lot every time, like a freestyle, no element is very strict. Moculescu wanted high serve, high risk in the attack. Last year our game was very structured to Georg Grozer. He got a lot of attention also from the opponents so, this year we will try to find another way to structure a game, to play differently. We miss a lot of players so we are still in the phase where we are finding our team, our place in the team. We are very young, this will probably be the generation for the next four years. We need to work together. Georg will probably come back, but more or less, this will be the team for years to come. We need to work hard in every World League weekend, to make little steps.”

Is the ultimate goal a medal in the Rio Olympics?

“A medal? I don’t know, but the Rio will definitely be the goal, a long-term phase, but of course it is three years away and we need to work, as I said, step by step. The European championship is the next step. A very difficult group for us. In the last European Championship, we made a bad result so now we want to play better. The group is difficult – Russia, Bulgaria, and the Czech Republic. It is going to be tough.”

Knowing all this, would you say the success for your team would be to pass the group phase?

“Yes, it is the first goal, to make it to the knockout phase. Then, we will see. Before Rio, there are other goals, everybody works for the possibility to go to the Olympics again.”

Serbian team, that you are meeting this weekend, also underwent many changes since your last encounter. They are also very young…

“I think that young teams, in general, have some advantages. They learn very fast, they are physically ready. When you got older, you can have some problems with injuries. When you are young, you just jump. Maybe, when it comes to the experience and the tactics, being young is not an advantage. For every young and new composed team, it is the challenge to combine old and new skills. We saw a little bit of Serbian team but there is a lot of potential on that team.”

How much do you know young Serbian players like Atanasijević or Lisinac?

“Lisinac made a good choice to come to Berlin. They will have a very good team and I hope they can go far in the Champions League. He played good in Poland. I didn’t know him before. As for Atanasijević, he is playing very stable knowing his age  I still think he has a much more potential in directions and in power but he has already reached a high level in his career and he will be a good replacement for Miljković. He just needs to keep on working.”

You mentioned Champions League. Your club Resovia will play in it, so what do you expect? Of course, if you decide to stay in the club? Are there any newcomers?

“Yes, I will stay two more years. We have some new players. Kovačević left us and will be replaced by Péter Veres, the Hungarian who played in Dinamo Moscow. Also, a young Bulgarian player Penchev will come. I think we will have a good team but still, the Champions League is very strong competition.”

You had a privilege to hold the trophy for to the best club in Europe when you were a member of Friedrichshafen in 2007. Can you repeat it with some other club?

“It was a long time ago. I hope to repeat it, but it is not easy. You can’t say ‘We will buy good players, we will become a team and we will win Champions League’. Sometimes you need luck, sometimes there are injuries. We need to keep on working in the group first.”

Before playing in Poland you also played abroad – in Russia. Is there any other club or a country in which you would like to play?

“Volleyball is definitively in a financial crisis, but I like challenges. In Russia, it was a great experience, we were good in the Champions League, and won the third place. Now I’m in Poland, we will see. Italy seems a nice country to play in with great atmosphere and organization of the league. I still have years to play, I’m not too old.“