Italy’s men’s national team met with the country’s Prime Minister, Enrico Letta on Wednesday at the Palazzo Chigi, following their qualification for the Final Six of the World League. Read latest volleyball news on Worldofvolley.com. 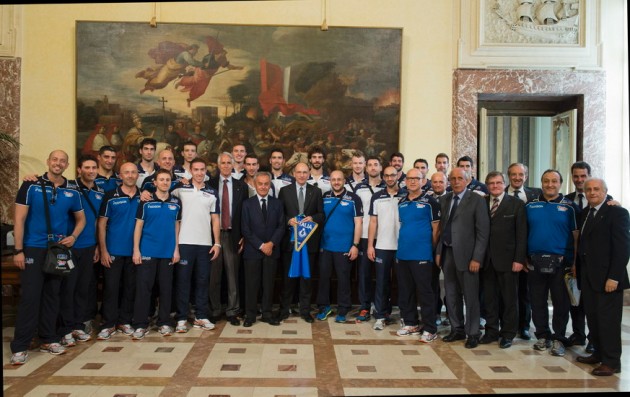 “Being here today is really a pleasure,” said  Giovanni Malagò . “I’ve always been close to the world of volleyball and this discipline is a driving force for the entire nation.  I would like to praise coach Berruto who is competent man with a great personality.”

President Magri said, “It is not the first time that we are welcomed here, but it’s always a great honour especially on such a special occasion. I am happy because today’s visit recognises our sport. I believe that the Federation has a vital social function and the Prime Minister welcoming us here to today is the proof.”

“It’s impossible to hide our pride in being here today,” said coach Berruto. “We are happy to represent our country and we will do everything to continue to honour the blue shirt we wear and will always try to keep flying our flag. Let’s go to Argentina thinking about the future, but with the desire to make our present, unforgettable.”

The World League Finals is scheduled to take place in Mar del Plata, Argentina from July 17 to 21.