One of the rookies in the upcoming CEV Volleyball Champions League, Italy’s Imoco CONEGLIANO, did already start preparing for the 2013/2014 season with a first get-together that took place this past August 20 at Palaverde in Treviso with some 300 fans in attendance. 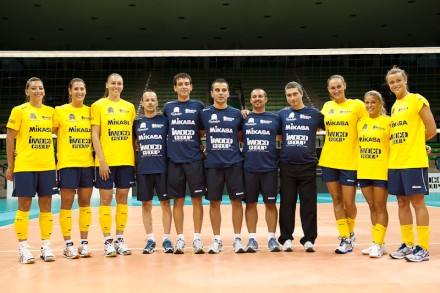 Imoco got the right to play in the CEV Volleyball Champions League after finishing second in the last edition of Italy’s national league, losing only to Rebecchi Nordmeccanica PIACENZA in the Championship series.

Six players have started working under the guidance of head coach Marco Gaspari; this small group includes Raffaella Calloni, Jenny Barazza and Carlotta Daminato – who have decided to stay with Imoco after last year’s memorable campaign – and three valuable additions to the roster, i.e. Marta Bechis, Valentina Tirozzi and Melissa Donà. All other players set to carry the hopes of Imoco in the coming season are currently busy with their respective national teams: Cristina Barcellini and Monica De Gennaro (ITA), Berit Kauffeldt (GER), Alexandra Klineman (USA) and Emiliya Nikolova (BUL) are preparing for the final round of the 2013 CEV Volleyball European Championship scheduled for September 6-14 in Germany and in Switzerland or about to play at the FIVB World Grand Prix Finals in Sapporo, Japan.

Read more news from this country clicking by Italy.