Metin Toy is the opposite of the Turkish national team at the FIVB Volleyball Men's U21 World Championship, organised by his country. He is also a member of the senior men’s national team of Turkey. 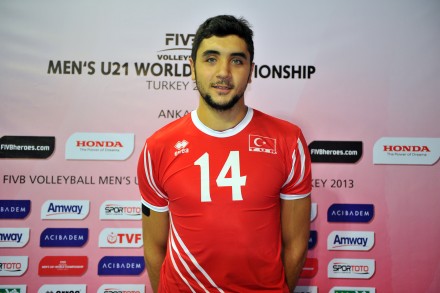 Metin’s life was changed when he moved from his home city of Kutahya to Istanbul at the age of 11 and went to watch a volleyball game at Burhan Felek Hall. He was just a spectator then, but on that day he was approached by coach Isa Tekler who asked him if he would like to play volleyball.

“My answer was that volleyball is a girls’ game,” he remembers laughing. “However I really wanted to try because there was something about volleyball that was pulling me towards it. So I accepted the offer and started to train. It was love at first sight.”

He started playing volleyball in Fenerbahce’s youth team and then stayed on at the Istanbul powerhouse as a professional. Metin has a younger brother, Huseyin Baykal, who also played volleyball in Fenerbahce last year. “It was a great pleasure and a very good memory to play in the same team with my brother,” Metin says. However, the two siblings will have to go their separate ways as Huseyin will play for Istanbul Buyuksehir Belediyesi next season.

Metin is extremely proud that his country is hosting the U21 World Championship.  “I am very happy for being a part of this competition and also for being the host of such a prestigious event,” Metin says. ”I hope we will make it to the final.”

Read more news from this country by clicking Turkey.