Gonzalo Quiroga, born in 1993 in San Juan Province, Argentina, is the outside hitter of the Argentinean national team at the FIVB Volleyball Men's U21 World Championship in Turkey. He started playing volleyball when he was 7 in Obras de San Juan. He is surrounded by volleyball players in his family. 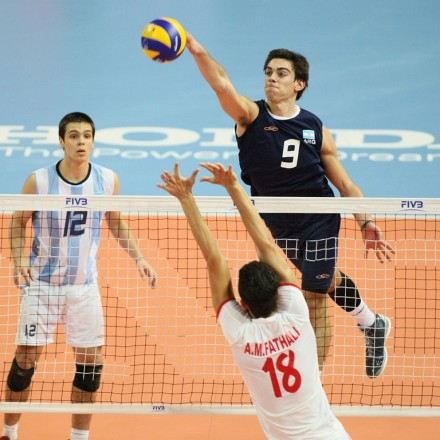 “I grew up in a volleyball loving family, this is what pulled me towards volleyball,” he says.

He is the nephew of Raul Quiroga, World and Olympic bronze medallist, and son of Daniel Quiroga, former volleyball player in the Italian Serie A2. Gonzalo’s older brother Rodrigo Daniel Quiroga is a player of Argentina’s senior men’s national volleyball team and also plays for Brazilian club Vivo Minas Belo Horizonte.  While Gonzalo is representing his country at the World Championship in Turkey, Rodrigo led Argentina’s men as their captain to the bronze medal at the 2013 Pan-American Volleyball Cup in Mexico.

“I admire my brother Rodrigo. He is my favourite athlete and one of my reasons to start playing volleyball,” young Quiroga says.

Gonzalo chose to combine volleyball with college education and he is on the eve of his fourth season with the UCLA Bruins in California, USA.  He picked this university for both its academic reputation and volleyball programme. He pointed to the silver medal from the Youth Olympic Games as his greatest athletic thrill so far.

“Turkey is a very nice country with lots of nice people.  It is the first time I am in Turkey and I like it here very much,” Gonzalo comments on the host country of the U21 World Championship. ”The volleyball hall is also amazing. I hope we will finish our pool in the second place at least and then we will get better in the following days.”