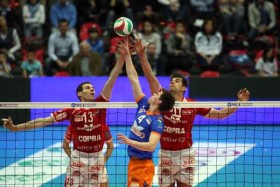 Beaten 3-0 in Piacenza, Monza pushed the contest to the tie-break this time but the guests still managed to clinch it. Piacenza will play for a place in the Challenge cup against Piacenza.

Emanuele Zanini (coach Acqua Paradiso Monza Brianza): “Piacenza was certainly more motivated than us tonight. Our club will not exist next year so we wouldn’t have had the possibility to take part in the Challenge Cup next season. Still, the players that I could line up gave their best for the shirt once again”.

Paolo Maffi (General Manager Copra Elior Piacenza): “The game has been much more difficult than expected, which goes to show that those who thought Monza would not play were wrong. The biggest week of the season starts now for us. We have to prepare for this final of challenge cup qualification, this is our last target of the season and we’re very keen on it”.

ITA M: This is unexpected – Velasco...