Omrcen, Podrasanin and Stankovic commented on the victory over Trentino in the final match of the Italian championship. 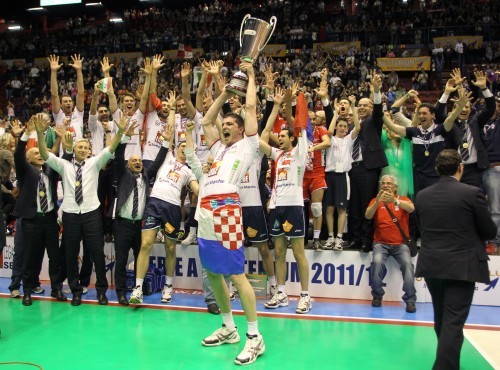 Igor Omrcen – “Revenge is always used cold and this final match was a beautiful revenge for the defeat in the final of the Italian Cup. To end my Italian career with the championship was a dream that I deservedly  fulfilled. This is a wonderful feeling. I dedicate this title to my family, society, to my teammates, fans and also to all those who have always believed in us.”

Marko Podrascanin – “We have proven to be a very strong team, in spite of the young players. We have not given up after 0-2 and we had not surrendered in the semifinal after a horrible defeat in the first game. This is the great team that has done something fantastic. We hope it is just the beginning.”

Dragan Stankovic – “After the bad start of 0-2 it might have seemed difficult to play, because until then they had done nothing wrong. However, we managed to overturn such an important match against Trentino. I thank to the spectators who have always supported us. We have put all the energy in this playoff and were deservedly awarded.”

ITA M: MVP Jiri Kovar and his teammates about victory