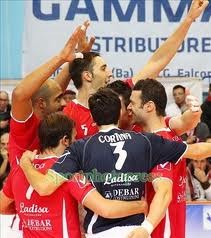 The team is ready for Sunday’s game against Corigliano following last week’s come back defeat conceded against Molfetta, which became even more bitter as captain Gerosa got injured and will probably miss the coming two encounters.

“They are going through a good moment of form – said coach Della Rosa about the next opponent – Except for the loss against Perugia, they have beaten Castellana Grotte and Genova. They are extremely powerful, with five players out of six who can hit the serve, jump serve too, very hard. We will try to make it difficult for them”.

Italy: Cuneo versus Trento on Sunday

ITA M: Schwarz back to Perugia.