ITA M: What Lube and Modena have in common? Trentino beat them both!

Trentino once again looks like that team which has been spreading fear all over Europe couple of years ago. Squad of Radostin Stoychev hammered Modena at home, and brought very first defeat to the Yellows in this season! 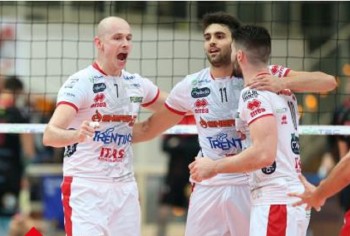 Martin Nemec played his game of the season, scoring 18 points in the big derby, Matey Kaziyski added 12, while Filippo Lanza made 10. It was that 10th point of Lanza which finished this game. Trentino missed four match balls before Italian international used the fifth for the big celebration in PalaTrento.

On the other side only Luca Vettori reached double-digit figures. He scored 13 points.

It was the very first defeat of Modena in this season of Serie A. Lube also lost only one game so far… Interesting enough, Trentino beat them both!