Only unfortunate set of circumstances might separate Igor Gorgonzola Novara from pole position in Serie A1 standings for the playoff. 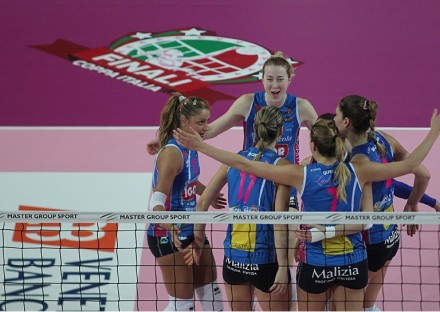 The leader of the Italian championship was better than second placed Liu Jo Modena in a great derby of 19th round in a fantastic match full of turnarounds.

Novara had promising 2-0 lead in sets with demolishing the opponent in the second (25-11!), but Modena gathered strength and hit back – 2-2! Home team celebrated in the tie-break!

Alexandra Klineman and Katarina Barun collected 24 points each for the Italian Cup winner.

Pomì Casalmaggiore took advantage of Modena’s loss to approach them to one point in the standings and return in the battle for the second place after defeating Zeta System Urbino Volley by 3-0.

Unendo Yamamay Busto Arsizio obviously lost the most of its strength in Thursday’s Champions League clash versus Dinamo Moscow and lost home to Foppapedretti Bergamo – 0-3.