ITA M: Trentino and Lube turned on their engines

Two Italian giants started with their preparations for the season 2015/2016. 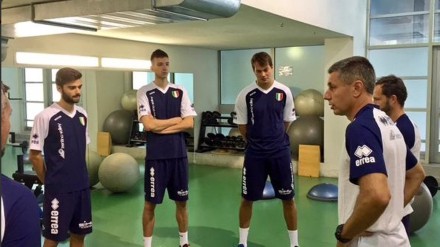 Diatec Trentino, Serie A1 title holder, will begin to train with only three players at disposal to the coach Stoytchev!  Ten of 13 players of Trentino are involved with their national teams, foreign and Italian.

Those that will wear the jersey of Trentino at start of preparations are: Greek opposite hitter Djurić (his national team did not qualify for the European Championship), the middle blocker Mazzone and the second libero – young De Angelis, promoted from the youth team.

Because other players will return to Trentino in several phases, Stoytchev will have less than a week to prepare his team for the Super Cup, on October 24.

Cucine Lube Banca Marche Civitanova will gather with a larger number of players.

Fei, Miljković, Corvetta, Cester, Gabriele, Parodi and Kovář (both recovering from surgery) will undergo medical tests today, before they start to practice under the command of an assistant coach D’Amico. First coach Blengini is engaged with Italian national team.