Italy completed its campaign at the European qualifier that was held this week in Zocca by downing Slovenia in three straight sets (25-21, 25-11, and 25-14) thereby keeping its leadership in the standings and advancing to the final round of the 2012 CEV Junior Volleyball European Championship – Men scheduled for late August in Gdynia (Poland) and Randers (Denmark). In the other match of the day Germany scored a very important victory against the Netherlands (3:1, 25-18, 28-30, 25-14, and 25-19), which meant the guys around head coach Ulf Quell also booked their spot for the finals of the Champs finishing as second-ranked team with the best score from the two third-round Pools. 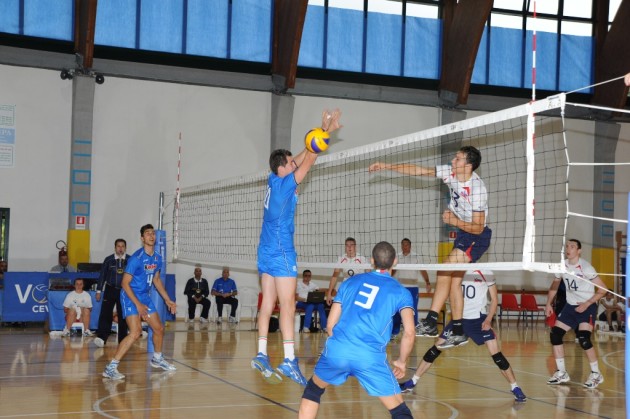 The starting field of the final round comprises the following teams: Poland and Denmark (host countries), Russia, Bulgaria and Serbia (first, second and third of the previous edition), Greece, Belgium, Spain and Turkey (winners of the second qualifying round played this past April), plus Italy, Finland and Germany (all qualified via the third-qualification round completed this weekend). The Drawing of Lots assigning the 12 teams to the two preliminary Pools of the final round set to run through August 25 to September 2 will be held this coming Thursday, July 19, in Warsaw.

The home guys of Italy swept all of their matches in Zocca and can already start their preparations for the final round without any other break this summer. “I am extremely happy and proud at the same time to coach this team that played with glowing hearts to bring home this qualification for the final round. It is wonderful that these guys will be able to experience such an important moment in their still young career” said Italy’s head coach Marco Bonitta.

About the match against Slovenia, Italy went straight to its goal and thanks to a great start won the opening set that meant the qualification for the final round was already guaranteed (25-21). A similar trend followed in the second set where the “Azzurrini” played with great confidence and maturity. Slovenia couldn’t resist and surrendered with set 2 and 3 being sealed by the home guys with scores that reflect their clear dominance on court (25-11 and 25-14).

The first game of the day was very important because Germany still had some good chances to advance to the final round while the Netherlands, on the other side, wanted to claim their first success in the tournament. The true motivation of Germany was decisive for the boys around head coach Ulf Quell who dominated a game where the “Oranjes” could not create any major problems except for the second set (25-18, 28-30, 25-14, and 25-19).

In the opening set Germany immediately took the lead and managed to keep that advantage, closing the operations quite quickly (25-18). The second set was very much contested, with the Netherlands that gave their best and brought it home after a thrilling final rush. In the third set, the Germans returned to the command and imposed their pace and quality. The same plot followed in the fourth set, and so Germany could celebrate the qualification for the final round as best second, overcoming France, runner-up in the other Pool completed on Friday. “I’m very happy for the qualification, it was our goal and we got it. This was a very difficult group, with Italy, which is a strong opponent. To make it through as the second-ranked with the best score was not easy, but my guys made it” stated a visibly satisfied head coach Ulf Quell.

Playing or not, she remains a true...