During the Presentation of the Schedule for the season 2012/13 the "Stracca Award" has been delivered. 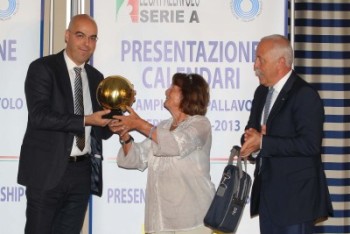 Stracca Award is established by Volleyball League last year in memory of journalist of the Corriere della Sera, Roberto Stracca, who died prematurely in 2010.

The second edition of the award, which is awarded to the best press journalist who reports from the Serie A, was won by Marco Tentella, the communications officer of Lube Banca Marche Macerata. The Award was delivered by Mrs. Maria Pia, Robert’s mother.

ITA W: Imoco back in action after...