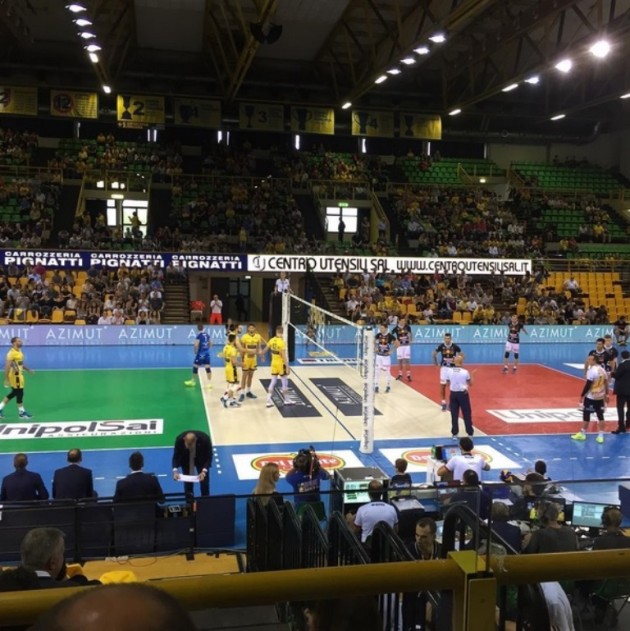 There were no major doubts in regard to the outcome of the encounter in PalaPanini, a place where Modena took Super Cup title last weekend.

Sora were close in the first two sets thus, taking the advantage of the absence of Earvin Ngapeth. The French star from Modena suffered a minor problem in the muscle of his thigh during warm-up. Modena were able to count on the attack of Luca Vettori (22 points) and American Maxwell Holt (15 points, 79% of attack from the middle) and great serve overall (11 aces in the first two sets). Belarussian Radzivon Miskevich scored 14 for Sora.

Sir Safety Conad Perugia bring home all three points, prevailing over the aggressive hosts LPR Piacenza 3-1 (25-18, 23-25, 25-16, 25-21). Cuban Fernando Hernández (18 points) and Hristo Zlatanov (11 points) hit strong, but one of the title favorites had Ivan Zaytsev (celebrated his 28th birthday today) on fire with 18 points, helped by American Aaron Russell (14 points) and Austrian Alexander Berger (12 points). Piacenza made too many errors (9 alone in the fourth set) and lost Bulgarian Viktor Yosifov due to injury in the second set.

Angelo Lorenzetti had a victorious debut at the helm of Diatec Trentino in Serie A1. His team downed newcomers Tonno Callipo Calabria Vibo Valentia 3-0 (26-24, 25-21, 25-22) mostly thanks to Filippo Lanza’s 14 points and Jan Štokr’s 12 points. Brazilian Deivid Júnior and Frenchman Baptiste Geiler had 10 points each in Vibo. Before the game set off, Trentino received award for having the most correct and warm crowd last season, the best coach (Angelo Lorenzetti), the best U23 player (Simone Giannelli, for the second year in a row) and the best hitter (Argentinian Sebastián Solé).