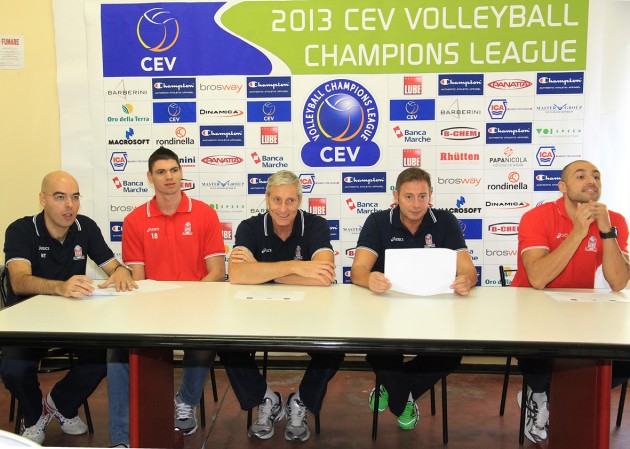 “I feel like we are one of the best four teams included in the starting field and we’ll play to seize the trophy” said team vice-captain Marko Podrascanin.

As for the teams included in the group, head coach Alberto Giuliani stressed: “I think that Generali UNTERHACHING has got a very good roster and so we shall expect tough matches with this side. I have already asked my players to do their best to finish first in the group. After that our goal will be to bring the trophy back to Macerata after ten years”.

General Manager Stefano Recine and captain Natale Monopoli were asked by the media to make some predictions about the teams that may have a real shot at the trophy. Monopoli – who is celebrating his fourth appearance in the CEV Volleyball Champions League and starred with the group in the final four back in 2007 and 2009 – said: “The level of the 28 teams included in the starting field for this edition is very high, as it was the case also in the past. It is therefore not easy to make any predictions but in my opinion the strongest competitors are the sides from Russia, Poland and Turkey, plus quite evidently our compatriots of TRENTINO Diatec and Bre Banca Lannutti CUNEO”.

Lube Banca Marche MACERATA is participating in Europe’s most elitist competition for the seventh time; this side claimed the trophy back in 2002 as the final four was held in Opole (Poland) and made it to the top four also in 2007 and 2009.

Another bomb from Zaytsev (VIDEO)