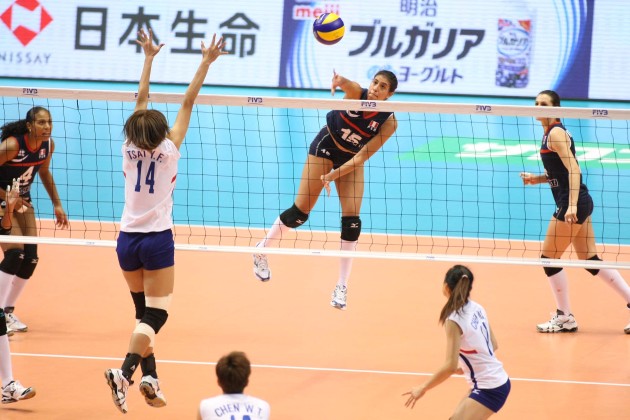 The victory was the first in the tournament for Peru (1-2) after losses to Japan and Cuba.  Chinese Taipei, which was hampered by unforced errors in the match fell to 0-3 with the defeat.

Ortiz had seven points in the set, while Chen Wan Ting had four. Peru moved out to a 4-1 lead in the second set after an extended rally ended with a Chinese Taipei spike sailing long. Another long rally went Peru‘s way on a block by Rueda for 7-4. Peru was on top 8-6 at the first TTO. After having trouble on reception in the first set, Chinese Taipei exhbited speed and organization early in the second. A service ace by Rueda gave Peru a 10-7 margin and Chinese Taipei took another timeout. A lengthy rally ended when Soto missed a spike for 11-9. Chinese Taipei equalized at 12-12 on a spike by Chen Wan Ting and then move ahead 13-12 as Peru called a timeout. Sota placed a nice return with her left hand to tie it 13-13. Peru moved back in front 15-14 on a powerful spike by Daniela Uribe and followed with a service ace to lead 16-14 at the second TTO. Another Daniela Uribe spike gave Peru a five-point lead at 19-14 as they seized control of the set. A beautiful save by Alexandra Munoz kept a rally alive and ultimately resulted in Peru going up 20-16. Teng’s spike drew Chinese Taipei within three at 21-18 and Peru took a timeout. Spikes by Sota and Rueda made it 24-20 and Peru took the set 25-20 on one more Soto spike.