Serbia overcame Venezuela 3-0 (25-14, 25-13, 25-23) on the final day of action in the FIVB Men’s Olympic Qualification Tournament at Tokyo Metropolitan Gymnasium on Sunday. 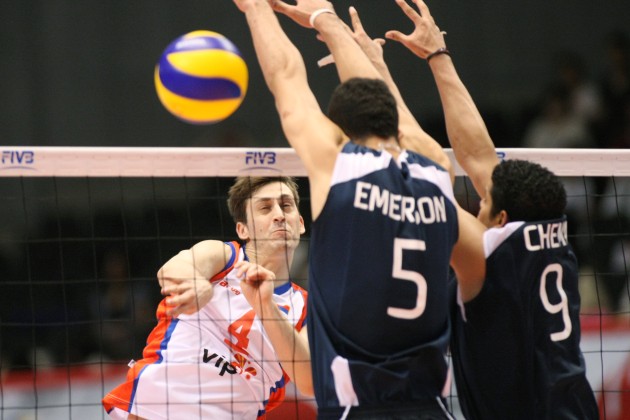 Serbia finished with a perfect 7-0 record, while Venezuela ended 1-6.

With nothing at stake in the match except pride, both teams struggled to get into top gear. Serbia edged ahead 6-4 on the back of poor play by Venezuela, but then Serbia got sloppy and the scores were level at 7-7. It was low-key stuff at this stage. Venezuela coach Roberto Garcia called a timeout at 9-11 to try and galvanize his players into action, but second good block by Bojan Janic on Fernando Gonzalez put Serbia four points up at 13-9. Venezuela captain Kervin Pinerua responded with a cracking crosscourt kill but couldn’t stop Serbia extending their lead to six points at the second technical timeout. Uros Kovacevic delivered a couple of missiles down the left line to make it 19-11 and Garcia called another timeout. It made no difference. Milan Rasic brought up setpoint with a firm spike and a clever topspin serve fooled the Venezuelan players and put Serbia 1-0 up.

It didn’t get any better for Venezuela at the start of the second set as Serbia cruised into a 5-0 lead, prompting Garcia to call his players off court again. Finally, he got a response. Gonzalez did some fist-pumping after a spike down the right and on the next point the Venezuelans defended brilliantly to set up a winner for Luis Arias. They closed to within two at 8-6 before Serbia pulled away again, Kovacevic and Rasic leading the charge to an eight-point lead at the second TTO. There was no comeback for Venezuela. A shot down the middle by Marko Podrascanin brought up setpoint and Rasic put Serbia 2-0 ahead with another decent shot.

Venezuela fought well at the start of the third set and even managed their first blocking point of the match – Daniel Escobar on Kovacevic – but Serbia snatched a one-point lead at the first TTO. The lead was up to three points at 13-10, but a good spell of serving by Arias and good spiking and a block by Jhoser Conteras turned the tables, forcing Serbia coach Igor Kolakovic to call a timeout with his side trailing 15-13. Serbia rallied but it stayed close to the end of the set, with Venezuela’s Kervin Pinerua and Arias landing some meaty blows along the way. A spike by Aleksandar Atanasijevic gave Serbia matchpoint at 24-23 and a shot down the left line by Janic ended the match.