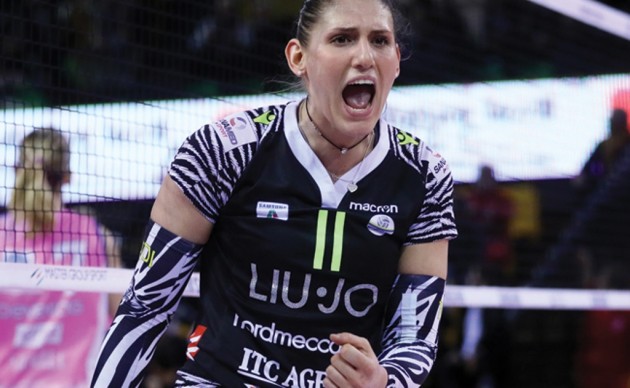 Some interesting news came from Brazil and Italy.

Osasco Audex have hired new receiver. They found a new player in Sesi-SP and she is Domingas Soares de Araujo. This 23-year-old attacker was a member of the Brazilian National team U23 who won the gold medal at World Championship 2015.

“It was a great pleasure to receive this proposal. Osasco is a respected team with the great Olympic players and important for volleyball. I hope to help the team to achieve the goals and win titles. I will work hard to stay in my best shape for this,” said a new member of Osasco.

The new opposite of Bergamo, Camilla Mingardi came from Modena although the first part of the season she played in SAB Grima LEGNANO and she is for sure a big reinforcement for the next season. Check her stats.

After she played in VNL she joined Italian team at the Mediterranian Games and she is one of the main scorers of the team at the tournament in Spain.

The 41-year-old middle blocker and the live legend of the Italian volleyball Simona Gioli found a new club for the next season. After she spent last season in the team from A2, Savallese Millenium Brescia who qualified to Serie A1, she moved to Olimpia Teodora from Ravenna.

“I am very happy with this choice. When the opportunity arose to come and play at Olimpia Teodora, I did not think much about it. The proposal immediately attracted me. The company is building a good team. Everything seems perfect to me, but we are at the beginning and it is normal that all looks very good. For me the important thing is still to have fun and make a championship playing as best I can. This is why I hope that what will come will be a fun year, in which we can play our game in every match”.