The duel starring Asseco Resovia RZESZOW and Italy’s Lube Banca Marche MACERATA – i.e. the current Polish and Italian champions – will be one of the most exciting clashes in the Playoffs 12 round of the 2013 CEV Volleyball Champions League. The first match in Rzeszow is scheduled for January 16. Read latest volleyball news on Worldofvolley.com. 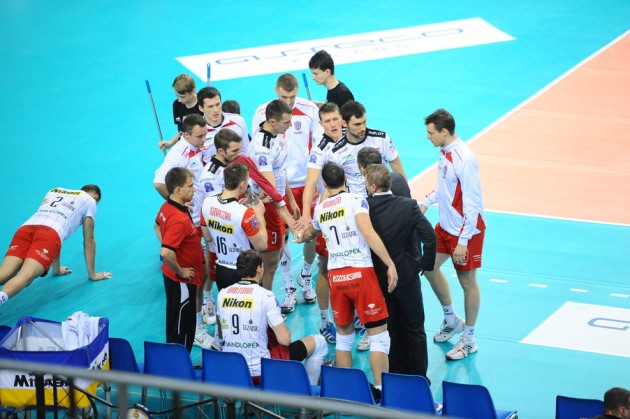 Both teams have very high expectations for their respective European campaign. However, Lube Banca Marche MACERATA is definitely one of the most successful clubs in the last decade – two times winner of the Italian league (2006, 2012) and winner of each European Cup trophy starting with the CEV Cup (2001, 2005, 2006), through the prestigious Champions League title in 2002, not to forget the victory of the Challenge Cup (2011). Taking into consideration the impressive achievements of the Italian powerhouse it does not sound strange that according to Polish media the Drawing of Lots for the Playoffs 12 was a bit unlucky for RZESZOW that in the last few years could not defeat any Italian team in the European Cups.

Nevertheless, Andrzej Kowal – mentor of Asseco Resovia – is not disappointed with the results of the DOL. “Lube Banca Marche MACERATA is a great team and it will be a big challenge for us to compete with the Italian champions. Our opponents are extremely powerful but generally we are playing better when we are facing very strong rivals. Obviously MACERATA is one of the strongest teams in the world. I think that all top Italian teams like TRENTINO, CUNEO and MACERATA are capable of winning the Champions League. They have an amazing potential in attack and service. We can expect from MACERATA something similar to what we have experienced by competing with Bre Banca Lannutti CUNEO in Pool G. We know that Lube Banca has some problems with the injuries of Cristian Savani and Jiri Kovar but there is still couple of weeks before those Playoffs 12 matches and both teams can have a different situation in terms of their final roster. Anyway they are a great team with a lot of classy players” says Andrzej Kowal.

“With many strong teams coming from the same countries in the Playoffs round we could expect a very difficult road to the Final Four. MACERATA is definitely a great team and if we want to defeat such a strong rival we will have to play at our highest level. We know that we can display much better Volleyball than we have done in our disappointing performances against Bre Banca Lannutti CUNEO in Pool G. We will try to overturn our negative record with Italian teams. If we want to succeed, we have to play as a team and be very consistent in every fundamental. Personally I feel very sorry for the serious injuries suffered by Jiri Kovar and Cristian Savani. I hope that they will recover as soon as possible. However, even without these players MACERATA is a very strong team with many great stars and if we don’t play very well against them we will be defeated for sure” stresses Aleh Akhrem, the captain of Asseco Resovia RZESZOW.

“I think that MACERATA is a good opponent for us. The first game in Poland will be vital because if we want to advance to the next round we must win at home. They are probably on a similar level than CUNEO. We have to play our best game and have a good strategy. Personally I’m very excited to compete with another Italian team. Because of the fact that our club has lost all of its duels with Italian sides in the last few years we should have even more motivation to play well and finally beat them. I think that our disappointing game against CUNEO at home is still in our minds. This time we will get another opportunity to win and it will be a good test for us” concludes Paul Lotman, Asseco Resovia wing-spiker who played for Marmi Lanza VERONA in the 2010/2011 season.