Poland escaped a tough challenge by the Czechs in four sets to almost secure their semifinal spot at the 2013 CEV Youth Volleyball European Championship – Girls. Malwina Smarzek and Magdalena Damaske combined for 40 points to lead Poland to their third victory in Pool I in Bar, Montenegro. 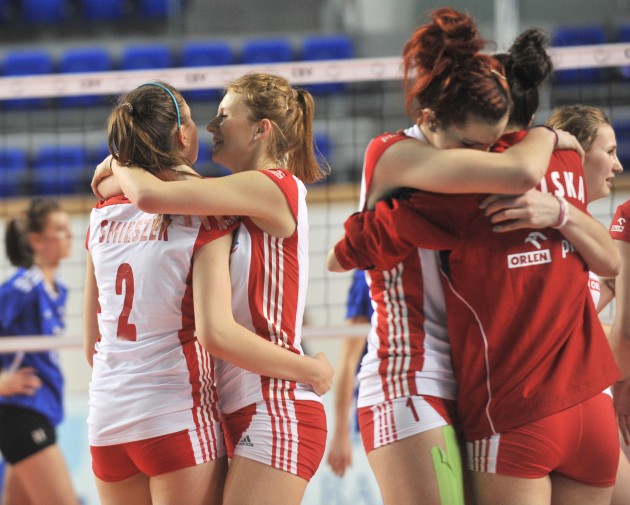 Malwina Smarzek and Magdalena Damaske combined for 40 points to lead Poland to their third victory in Pool I in Bar, Montenegro. Poland booked 17 block winners.

The Czech Republic got off to a good start with a 16-13 lead in the opening set as their servers complicated Poland’s offensive game. Michaela Mlejnkova and Katerina Slamova were, as usual, lethal in attack for the Czech Republic. Poland saved five set balls but couldn’t prevent Slamova hammering the Mikasa down on the Czech Republic’s sixth occasion.

In the second set, Poland’s Smarzek helped improve her team’s serving powers as she ran a series of nine consecutive missiles to outscore the helpless Czech side early on. Poland built a commanding lead thanks to impressive offensive combinations and four winning blocks. Smarzek added more uncontrollable hammers from the service line and got help from her teammates at the net as they drew even at 1-1.

The third set was much closer as both refused to let the other get the better of them, with long rallies. The Czech Republic kept Poland at bay but the young Polish talents managed to get the better of the plays and increased their lead towards the end of the set. Middle-blocker Malgorzata Smieszek finally put an end to the Czech challenge with a service winner on Slamova.

Poland looked determined to finish off the match with a 3-0 run in the middle of the fourth set. The Czech Republic, however, made some virtuous runs to stay in the game with a series of six consecutive points from 15-18 to 21-18 but Poland followed their game plan to regain momentum at 23-23 and take the win 27-25.

Poland captain Paulina Baldyga: “Today’s match was very difficult for us, but at the same time very important. We were full of enthusiasm and will try to keep the same atmosphere to win our last Pool match versus Greece.”

Poland head coach Grzegorz Kosatka: “This was a very significant match for us. Our game was not perfect, but we won.”