POL W: Best season in the history of Tauron MKS

Volleyball season 2012/2013 for Tauron MKS DABROWA GORNICZA is still not over, and we already know that it will be the best ever. DABROWA GORNICZA won the semi-final competition against BKS Aluprof BIELSKO-BIALA and thereby improved their achievement from last season. Read latest volleyball news on Worldofvolley.com. 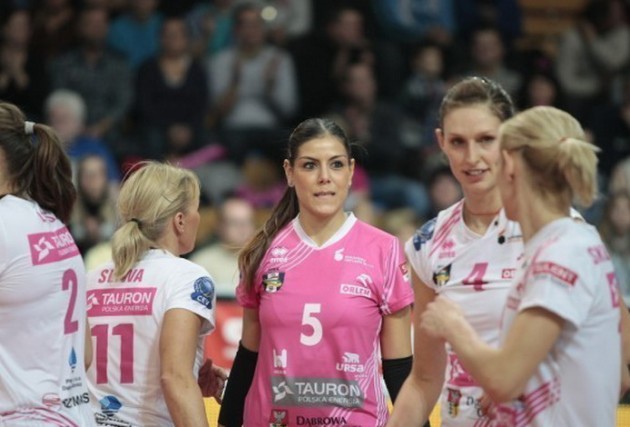 Last year DABROWA GORNICZA not only reached the Polish Cup, but won a second bronze of the Polish championship in history. Now DABROWA GORNICZA improved, they are in the finals and certainly not said the last word. “I am very glad that I could help the team and I feel great to have in my first season in Poland achieved so much with my friends. I am also tired, the semi-final match cost us a lot of nerves and emotions. It was very hard, non-stop had to be focused and we could not afford a moment of distraction” said Tauron MKS DABROWA GORNICZA player Milena Stacchiotti.

The Italian center gained eight points, including one block. “I tried as best I could, I’m sure I gave my best. We were nervous because we wanted to show our best. We had problems with reception and we could not play what we wanted, but managed to win” added Stacchiotti.

One Semifinal competition is over. In the second there is 2:2 between Bank BPS Fakro MUSZYNA and Atom Trefl SOPOT. In Wednesday’s match in MUSZYNA will be selected Tauron MKS rival. Milena Stacchiotti had no special requests about the last obstacle on the road to gold. “For me it is not important against who we will play in the final. I don’t know who to choose. Regardless of who we play we will try to play our best game” says Milena.