Brazil beat Poland in four sets in the first match of Pool A in Warsaw, Poland. This match opened the competition for both teams and for the entire pool. Brazil's Leonardo Vissotto Neves was named MVP after recording 16 points, Lucarelli top scored with 17. 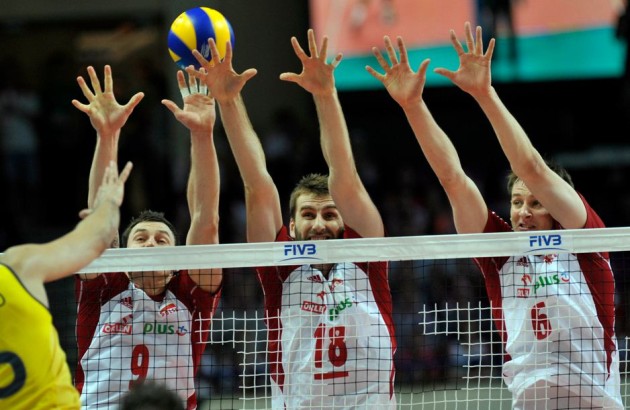 Set 1 started with the Canarinhos quickly gaining a four-point advantage (6-2), which forced Poland‘s coach Andrea Anastasi to call time-out. Later, with the help of Bartosz Kurek‘s spectacular serves, the Poles managed to tie the score at 9-9 and then take the lead. Brazil stayed closely behind, though, not letting the hosts get too comfortable. The play remained on a point-by-point basis, but eventually it was Brazil who took the set 25-22.

The second set again started better for the guests as they jumped ahead at 10-7, regardless of the White-Reds’ impressive digs and powerful serves. Brazil maintained in control throughout the set and won it 25-20, taking a 2-0 lead overall. The best scorer for the Canarinhos was Vissotto with points seven points.

Brazil kept the momentum from the previous sets and continued their domination in the third. Nevertheless, the Poles were determined to stay in the game and did not let the world No. 1 get too far ahead after they leveled the score at 6-6. Bartosz Kurek once again helped his team with his rocket-like services and the hosts took the lead at 12-10. Poland kept their focus, leading at one stage by three points at the second TTO. Strongly motivated the 2012 World League champions picked up the set 25-22 to remain in the match at 2-1.

The nine-time champions refused to let the Poles maintain control and quickly took the lead at the beginning of the fourth set. The middle part of the set was a display of their power as they jumped ahead to 16-9 at the second TTO. At 17-9 down, Anastasi decided to change the setter and Fabian Drzyzga came on court replacing Lukasz Zygadlo. The replacement did not change the play, though, and it was Brazil who celebrated the victory in the set 25-15 and in the entire match 3-1.

It was only their second win in the last six games against Poland.

Both teams will meet again on at 8:15pm local time in Lodz, Poland.