POL W: Hundreds of fans get together to celebrate memorable season for Tauron MKS DABROWA GORNICZA

At the end of a memorable season where the club won the national cup and the Supercup before finishing second in the national league, the city of Dabrowa Gornicza organized a special party to celebrate with all those involved in this successful campaign. 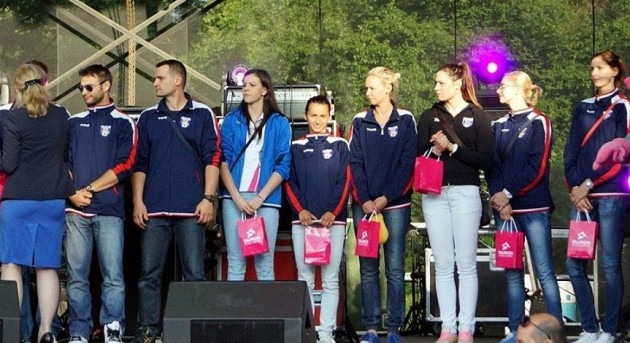 The party got started at Pub Sportowy which is located within Centrum sports hall where the players and their fans could review video highlights of the season. A Volleyball quiz with special awards followed before the supporters could take pictures with their heroines and ask questions about their future with Tauron MKS.

After that the players moved to Haller Park where a tent was set up to distribute signed photos, gifts and other memorabilia to the fans. The players showed up with no delay and then greeted their fans from the stage where a concert by a local rock star was to follow. The fans were addressed by club president Robert Kocma as well as by the Mayor of Dabrowa Gornicza, Zbigniew Podraza.

“We are overwhelmed by the many fans that came to join us for this special end-of-the-year get together. It was a great opportunity for the supporters to talk and chat with their favorite players” says local Press Officer Michal Swarlik. “We hope that next year there will be other occasions to celebrate together with our fans”.