CL W: Tauron MKS looking for win at any cost

In the fifth round of the CEV Champions league, Polish Tauron MKS Dabowa Gornicza will host Dinamo Kazan from Russia on Wednesday. 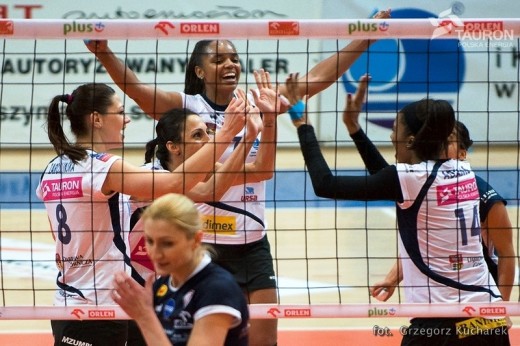 After a very poor start of the season, Tauron MKS DABROWA GORNICZA is slowly playing better and better.

Last week Poland’s vice champions lost to Switzerland’s Volero ZÜRICH only at the tie-break and this week will play their last home match in the prelims of the 2014 CEV DenizBank Volleyball Champions League – Women by hosting Pool leaders Dinamo KAZAN of Russia.

“Unfortunately at the tie-break we ran out of fuel and we did not have any energy anymore” says Tauron MKS libero Krystyna Strasz about the game with Volero.

Though they lost to Volero the team claimed last weekend their last game in the national league edging Siodemka SK LEGIONOWO 3:1.

“We did not show our best Volleyball” says Italian-born head coach Nicola Negro. Tauron MKS made 31 errors in four sets. “Certainly there is something we have to work on” adds team captain Elzbieta Skowronska.

The coming match with Dinamo KAZAN will be a real challenge taking into account the strength of the Russian team. Dinamo is also one of four teams with an immaculate record of four victories so far in the competition. Their goal is to win this year’s Champions League and they certainly will try to prolong their winning streak with Tauron MKS.

“We are trying to keep up the quality of our performances and are very motivated to achieve a good result in this year’s CEV Volleyball Champions League” commented Jordan Larson-Burbach after last week’s 3-0 victory over Stiinta BACAU.

EEVZA Youth Boys’ Championship about to start in Estonia