The leader in the standings in Orlen League, KPS Chemik Police, recovered from a surprising lost a week ago against Tauron Banimex MKS Dąbrowa Górnicza and defeated BKS Aluprof Bielsko-Biała in a derby of the 16th round. 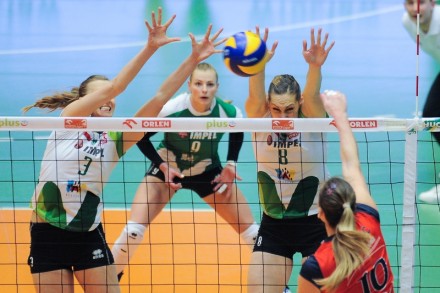 Chemik almost allowed itself another failure, it had 2-0 lead in sets and scored victory only after tie-break.

It was led by Anna Werblińska (17) while Agnieszka Bednarek-Kasza and Stefana Veljković scored 13 each. Helena Horká was the best scorer in Bielsko-Biała with 17, followed by Natalia Bamber-Laskowska and Heike Beier, 16 points both.

Runner-up on the table, Polski Cukier Muszynianka, keeps following Chemik and only has one point less. It beat KS Pałac Bydgoszcz as a visitor in four sets thanks to 17 points from Katie Carter and Sylwia Wojcieska.

Impel scored 21 points from blocking (18 after three sets), most of them by Agnieszka Kąkolewska – 8!

POL W: Chemik will try everything to...