Tauron MKS DABROWA GORNICZA cruised to a straight win over DRESDNER SC, and is now waiting for the last round in Pool D coming up next week against Eczacibasi VitrA. Read the latest news from volleyball world on worldofvolley.com. 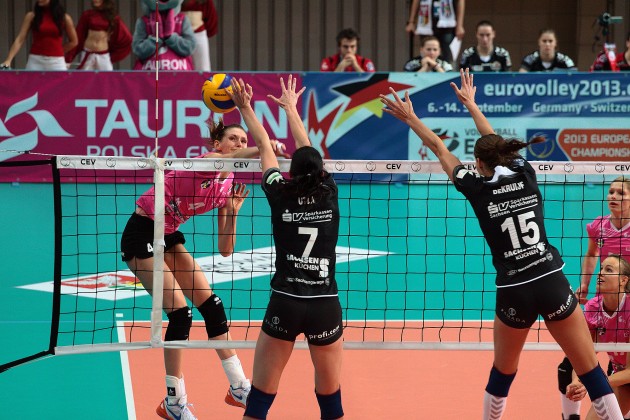 Actually the hosts caught a slow start going down 1:4 in the first set before some blocks and the serve of Elzbieta Skowronska could help the local heroines find their way into the game. After leading 8:7 at the first technical time-out, DABROWA GORNICZA was having a tough time to stand the pressure put by DRESDNER SC that went ahead by three points and even set the pace 24:20 right by the end of the set. However, the guests missed out on four set balls and DABROWA wrapped it up at 27-25.

Tauron MKS immediately set the tone in the second set (4:1) and quite easily controlled the operations anchored by a great performance by Joanna Kaczor. She was supported by Joanna Staniucha-Szczurek and DABROWA GORNICZA went up 16:10 by the second technical time-out to finish it off quite quickly at 25-17 for the provisional 2:0.

A real fight followed in the third set where Natalia Nuszel scored some points for the home side in attack as well as from the serving line, Skowronska then claimed a margin of two (18:16) that was kept up to the end (25-23) for a memorable home win in straight sets.

FRA W: Home win for RC CANNES to stay in contention for ticket to Playoffs 12

CL W: Waldemar Kawka – “It was a strange match tonight”