Ural UFA of Russia advanced to the semis of the 2013 CEV Volleyball Challenge Cup – Men by edging for the second time in about one week Turkey’s Galatasaray ISTANBUL. This and other volleyball news read on Worldofvolley.com. 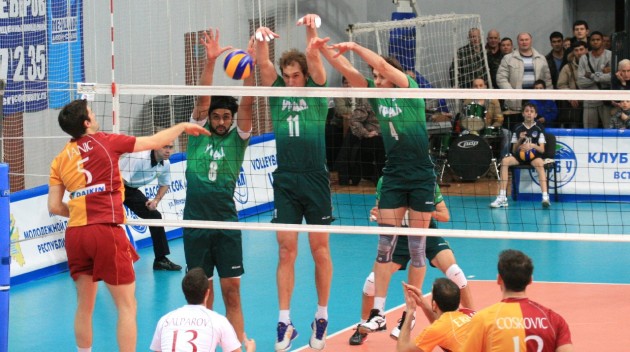 After losing last week in Ufa, Galatasaray started out very determined and dictated the pace all the way through the opening set (8:6, 16:15) cashing it after a close final rush (28-26). The hosts did display a very solid performance also in set 2 (8:4) and were able once more to have the upper hand after a close fight (27-25). Starting from the third set and with the addition of giant Alexey Kazakov (217 cm), Ural UFA found their way into the game and controlled the operations (8:5, 16:7) dominating the scene and seizing that section with the terrific score of 25-13. The fourth set turned into another great showdown with Ural UFA ultimately calling for the tie-break.

This was the last chance for Galatasaray to possibly go for the golden set but Ural UFA did not show any mercy for the home guys and paced by their Brazilian star Leandro Vissotto – who amassed 31 points in the end – could cruise to the final 15-10 that signified their qualification for the semis to play there Delecta BYDGOSZCZ of Poland.

How to Warm up for Volleyball

Runners knee – A Common Cause of Knee Pain