One of the best attackers in the world decided to leave Russian League. The reason is his injury 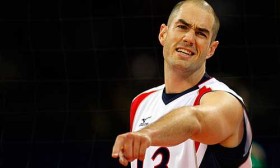 “I don’t know, when I will be ready to return to the game,” says Clayton Stanley.

American player has been playing in Superleague for a long time.

After four years in Zenit Kazan he changed the club and joined Ural Ufa.

Now he needs to go back and recover.

Clayton Stanley has not played with his team for a long time.

He returned from the World Cup with a serious injury and he had to pass through surgery.

Because of his long-term rehabilitation both sides decided to finish their cooperation.

Stanley wants to get fully recover and be able to join American national team in London during Olympic Games.

“My doctors and my coach claims it can be 2 to 3 months.” – Clayton Stanley says.

Now he will be replaced by Russian player Andrey Maximov.

If you make mistake, Muserskiy will punish...