Russia’s boys added another gold medal to their collection after claiming the final match of the 2013 European Youth Olympic Festival where – similarly to what they had done this past April at the European Championship – they beat Poland 3:1 (25-17, 19-25, 25-18, and 25-18). 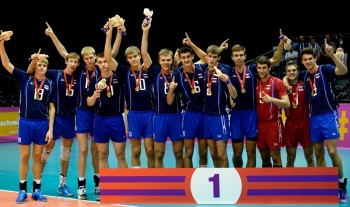 The guys mentored by head coach Alexander Karikov seized the EYOF crown after they had previously claimed gold this year at the CEV Youth Volleyball European Championship in Laktaši (BIH) and at the FIVB Boys’ U19 World Champs held a couple of weeks ago in Mexico.

After surviving a dramatic five-setter against Italy in the semis, the Russian express got back its usual quality and consistency to beat Poland in what was a remake of the European Champs final.

Dmitry Volkov paced Russia in the final game with 18 points with Victor Poletaev and Maxim Troynin also finishing in double digits with 12 and 11 respectively. Aleksander Sliwka and Artur Szalpuk were Poland’s best scorers as they registered 18 and 16 in their losing effort.

Get into shape with volleyball