A crowd of 4,800 was in attendance last Thursday as Russia’s Omichka OMSK REGION beat Italy’s Prosecco Doc-Imoco CONEGLIANO at the golden set to make the Playoffs 6 of the 2014 CEV DenizBank Volleyball Champions League – Women. This makes the “V. Blinov” sports complex the most visited venue in Europe so far this year; the icing on the cake for this large audience was the home victory of their heroines who will now be vying for a spot in the Final Four tournament playing Turkey’s Eczacibasi VitrA ISTANBUL in the next round. 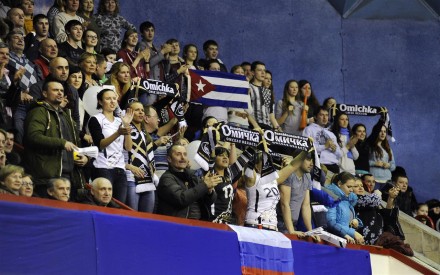 Omichka has performed extraordinarily well in their first CL campaign, topping the charts with a total of 64 aces and being ranked fourth with 554 when it comes to the scoring tables. The players from Siberia’s second largest city are also the second-best team overall when it comes to the percentage of the attacks (45%) they have successfully completed.

Individually the “Cats” – as they are nicknamed in Russia – are among the best players in this year’s CEV Volleyball Champions League as well. Marina Babeshina (Sheshenina) is the second-best setter, while team captain Elena Yureva (Hendzel) has recorded 17 aces and 84 blocks so far, thereby claiming the third and fourth rank respectively in the relevant standings. Cuban-born Nancy Carrillo has registered 146 points so far – including 14 aces – to settle for fifth place among the top scorers of the competition while Natalya Mammadova is the fourth-best spiker with 117 points.

The next round of the competition is coming up already next week where Omichka will be up against Eczacibasi at home before travelling to Turkey a week later for the return game to be played at the Burhan Felek Volleyball Hall. The Final Four tournament of this year’s CEV DenizBank Volleyball Champions League is scheduled to take place on March 15-16 in Baku, Azerbaijan.

Single worst service ever? Check it out! (VIDEO)