On Sunday the players of Belogorie BELGOROD wore some special jerseys to celebrate their victory in the 2014 CEV DenizBank Volleyball Champions League – Men. These golden t-shirts – displaying the official logo of the competition including the slogan of the “Fair Play Volleyball Way” campaign – were conceived by Alexander Zuychenko and their production had started well before the Final Four weekend in Ankara. 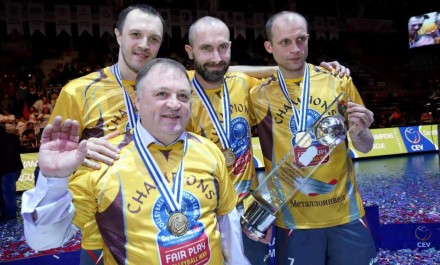 Click here for a comprehensive gallery of the Final Four Tournament in Ankara.

Questioned if he did not feel the t-shirts were produced way too early, Zuychenko responds: “No, because I strongly believed in our chances to seize the day in Ankara and could see that our players were extremely motivated to go for gold. So I decided that I wanted to make a surprise to them. Of course we were all nervous before the Final Four weekend but somewhere deep inside we had the feeling that everything would be fine and so it was in the end.”

One of these t-shirts was worn also by the legendary coach of Belogorie, Gennady Shipulin. A few days after the final match, he looks back at his team’s success with much pride: “I am evidently very happy that we won this Final Four Tournament. We have gone a very long way since the beginning of the season and in the end we finished atop of the tables. This year is very special for Russia and Russian sports. Everything got started with the Sochi Olympic and Paralympic Games where our athletes performed really strong. We followed in their footsteps to bring more success to our country. I also have to thank the many fans who travelled with our team down to Ankara; people of different age and social status, who all came together in order to support our team on the way to this title. I also would like to thank the organisers of the Final Four Tournament in Ankara who did a great job and put on a great Volleyball party.”