Dinamo Krasnodar is the Russian Cup winner for the season 2014/15! This is the second Cup trophy for this team in history. 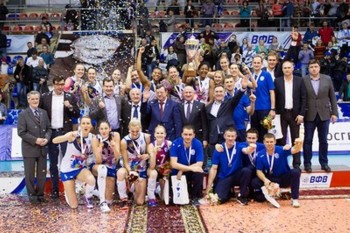 In the epic final in the Krasnodar Arena, home team outplayed Omichka 3-2 (26-28, 25-22, 25-22, 19-25, 15-11) and seized the valuable trophy! The game was just spectacular. Dinamo was a clear favorite, not just because of the home court, but because of the all major transfers during the past summer. But, Omichka came to Krasnodar to fight and players of Zoran Terzić really did fight until the last breath.

They were a worthy opponent, despite playing without head coach Terzić who got sent off in the second set for arguing with the referee. However, away team missed too many opportunities in the tie-break. At the result of 10-9 and 11-10, Omichka failed to convert several counterattacks into points. Instead of tying the game, Krasnodar escaped on two-point difference and eventually finished the match with a strong spike by Sokolova.

This is the second Russian Cup trophy for Dinamo Krasnodar. The last one was won exactly 20 years ago – in 1994!

Congrats to Krasnodar but I was way more impressed by Omsk. They played their hearts out even after their coach got red carded. They never gave up. Their defense is also incredible.

They will get even stronger when Carillo returns from injury.

EXCLUSIVE: Calderon – “I will never play...