Zenit was simply too powerful for HalkBank in the first leg of the CEV Champions League Playoffs 6. The final score says everything - 3-0! However, it must be emphasized that the Turkish team played in Kazan without one of the best players – Osmany Juantorena. 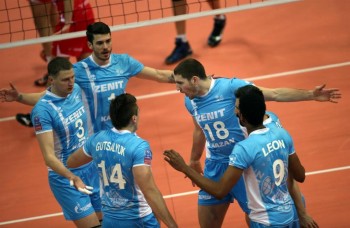 Super attacking line of Zenit has immediately started to win numerous points for the home team. Wilfredo Leon, Matt Anderson and Maxim Mikhailov looked really powerful, and they brought first “big” lead to the Russian side – 14:10. But, despite playing without Osmany Juantorena, HalkBank showed that it has not arrived in Kazan with a white flag.

Away team scored next three points and approached to 14:13. But, Wilfredo Leon crushed all their hopes of a comeback. At the score 17:15, Cuban star came to the service line… He has stayed there until 22:15! Just to mention that it was Leon himself who won most of those points! At the end – 25:19, 1-0 for Zenit.

One of the spikes by Leon

Kazan crew simply continued where it left off in the previous set. Players in sky blue jerseys did not need much time to escape on a safe distance. It was 4:1, then 8:4, then 14:8… Saeid Marouf was setting perfectly, while Leon, Anderson and Mikhailov were just ruthless with their spikes. The margin increased to +7, 17:10, and it has remained the same until the end of the second set – 25:18, 2-0 for Zenit.

In the third set, HalkBank managed to be a worthy opponent to Zenit for half of the road. It was 12:12, when it happened – 7:1 run of the Kazan crew! Maxim Mikhailov scored for 14:12, Marouf and Apalikov blocked Kubiak for 15:12, a bit later Mikhailov scored again for 17:13, then Batur and Sokolov made mistake for 18:13, Matt Anderson made an ace for 19:13… Zenit was cruising toward a straight sets win, and they eventually reached it after two consecutive aces of Wilfredo Leon – 25:17, 3-0!