RIO 2016 M: Russia down Iran, Italy know their rivals in the quarterfinals!

Russia will enter the quarterfinals draw, as they will finish the Group B either at the 2nd or at the 3rd spot. On the other side, Iran are the 4th placed team in Group B and they will face Italy in the knockout stage! 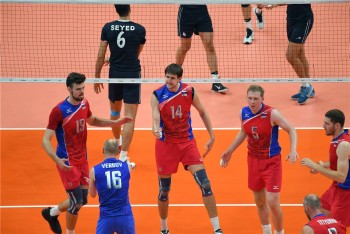 We know the first pair of the quarterfinals at the Rio 2016 men’s volleyball tournament.

After Russia defeated Iran in straight sets it became clear that the Iranian crew will finish the group stage as the 4th placed team in Group B, which brought them a clash against Italy.

On the other side, Russia will take either 2nd or the 3rd place in Group B, depending on the final score of the match between Poland and Cuba. Anyway, that does not really matter anything, as the reigning Olympic champions will definitely enter the quarterfinals draw which will be held after the final game of the group stage.