Turkey subdued a quite harmless Dutch team in straight sets in their last Pool match of the 2013 CEV Youth Volleyball European Championship – Girls. The Turks keep a clean sheet with a 5-0 win-loss record. Ada Germen and Pelin Aroguz topped all scorers with nine points each for Turkey. 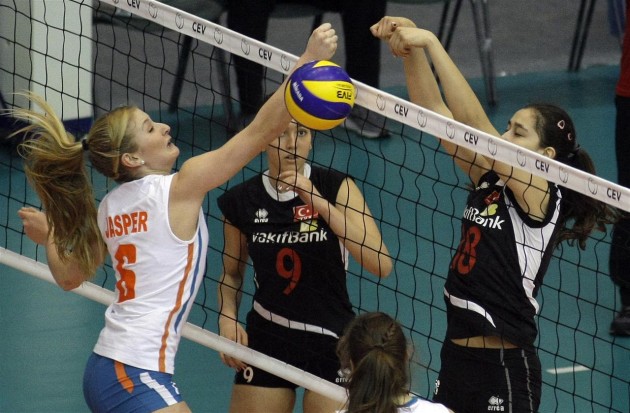 Ada Germen and Pelin Aroguz topped all scorers with nine points each for Turkey as they concluded their perfect record in Kladovo on Wednesday night.

Turkey took an easy first set against their West European rivals as they unleashed their usual game, not allowing The Netherlands to counter attack.

Despite the tandem of Tessa Polder and Daphne Knijff confusing the Turkish blockers on their attack in the second set – alternating hitting on each side – Turkey adjusted their block to stamp out the Dutch tactic. Turkey’s attackers took the opportunity to turn the tables at 16-16 and never looked back.

Turkey were wary of another Dutch uprising in the third set and although there were several attempts by The Netherlands to extend rallies, Turkey made sure that they always came out on top, leaving the faith of the Dutch team in the hands of host Serbia and Germany.

Turkey Head Coach Catma Sahin: “It was important to win today and go to the final phase in Bar with a clean sheet. Now, we’ll focus on the semifinals to continue our winning streak.”

The Netherlands head coach Saskia van Hintum: “Today we played against a very good team and it is not a shame to lose. However, we prepared well for this match and I feel that we could have done more.”