Russia downed France 3:1 on Wednesday afternoon to book a ticket for the top eight round at the 2013 CEV Youth Volleyball European Championship – Girls. Russia`s Angelina Sperskayte topped the score chart with 18 points, including 5 aces. 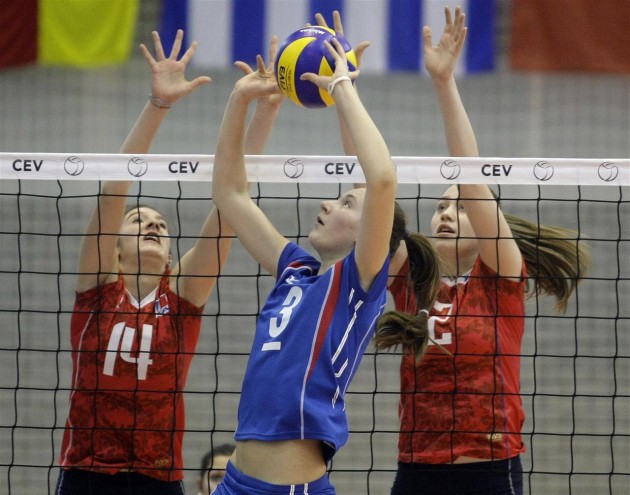 Even though the French had nothing to play for in their last Pool II match except for glory, they gave Russia a hard time, especially at the start of today’s first match in Kladovo. Russia jumped out to an early 6-2 lead in the first set but France quickly found their rhythm with excellent attacks and four blocks. Juliette Fidon helped her side to wrap up the first set 25-20.

Russia managed to make adjustments and organize their play after the three-minute break. They succeeded to contain the French offense with only Lara Davidovic and Fidon making occasional attacks on the wings. Taisia Konovalova stepped up for Russia and contributed several inspiring serves to maintain the Russian lead.

Svetlana Serbina helped her side with another couple of blistering serves to rally to a 6-0 early in the third set. France had no answers in the third and fourth set as Anastasia Lopatina and Angelina Sperskayte both scored double figures, going on a scoring rampage at the expense of a suffering French defense. Russia only allowed a few attacking maneuvers by the young French talents as they covered all attacking points at the net and on the floor and quite easily took the match.

Russia head coach Yury Shchuplov: “We did our job today, that’s it. However, it’s a shame that we haven`t played before like we did today.”

France head coach Serge Marouteau: “We mainly made it too easy for our opponents. We gave Russia several chances to score, while on our side we committed too many mistakes.”